Ananya Panday and Suhana Khan never miss each other's social media posts and that clearly reflects through their frequent Instagram exchanges. Something similar happened on Ananya Panday's latest Instagram entry. On Tuesday, Ananya posted a set of stunning pictures of herself on her Instagram profile. In the photographs, Ananya, dressed in a powder blue satin outfit, can be seen trying out different poses. Without any caption, she added a wave and shifty eyes emoji to her post. Suhana Khan wrote just one word: "Wow" and she added heart-eyed emojis along with it. Check out Ananya Panday's post here:

This is what Suhana Khan wrote: 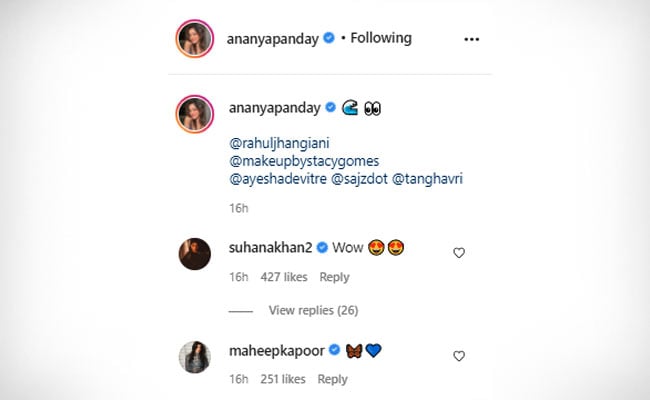 Suhana Khan and Ananya Pandaya are a part of a close-knit circle, which also includes Shanaya Kapoor, daughter of Sanjay and Maheep Kapoor. She recently made her debut as an assistant director.

Suhana Khan, daughter of Shah Rukh Khan and Gauri Khan, has inherited her love for acting from her father. She studied films at England's Ardingly College and is currently a student at the New York University. Suhana also featured in a short film titled The Grey Part Of Blue, directed by Theodore Gimeno. Suhana has also featured on the covers of a few fashion magazines.

Ananya Panday, daughter of Chunky and Bhavana Panday, made her Bollywood debut in 2019 with Dharma Productions' Student Of The Year 2, co-starring Tiger Shroff and Tara Sutaria. Ananya also featured in Pati Patni Aur Woh, co-starring Kartik Aaryan and Bhumi Pednekar. The actress also starred in Khaali Peeli, opposite Ishaan Khatter. The actress has also signed a film opposite Deepika Padukone and Siddhant Chaturvedi, which will be backed by Karan Johar's Dharma Productions. Other than films, Ananya Panday also has a digital social responsibility initiative called "So Positive."