"With my very little woman," Lisa Haydon wrote in her caption 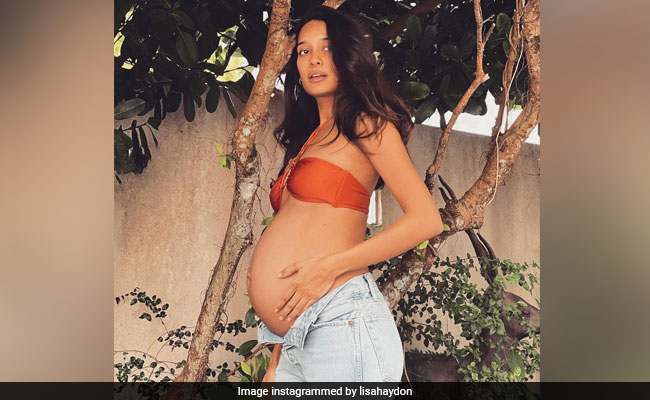 Let's just take a moment to appreciate Lisa Haydon's Women's Day post. The model-turned-actress dedicated her post to her unborn daughter. Mom-to-be Lisa shared a striking picture of herself, in which we got a glimpse of her baby bump. In the picture, Lisa can be seen dressed in a bikini top of sorts, which she wore with a pair of denims. "With my very little woman," Lisa wrote in her caption. In the comment section of the post, Shibani Dandekar wrote: "Are you even real? Oh my Gosh how stunning can you be?" Actress Evelyn Sharma commented: "Amazing! Congratulations Lisa!"

The actress announced her third pregnancy on Instagram in February. "#3 Coming this June," she wrote while sharing a video. "So, I have been meaning to get up on her and chat with you all, to catch you up on some stuff that's been happening lately," she said and added, "Zacky, can you tell everyone what's inside of mommy's tummy?... "A baby sister," said Zack.

Model-turned actress Lisa Haydon, who stepped into Bollywood with the 2010 film Aisha (which starred Sonam Kapoor in the titular role), married entrepreneur Dino Lalvani in 2016 and the couple welcomed their first child Zack in the year 2017. Lisa and Dino welcomed their second child Leo in February last year.

Lisa Haydon is best-known for featuring in films like The Shaukeens, Ae Dil Hai Mushkil, Rascals and Housefull 3 to name a few. Lisa also featured in the web-series The Trip (Season 1) and she was last seen as a judge on the television show Top Model India.