'Hungover', Priyanka Chopra? Your Mom-In-Law Has The Fix. So Sweet 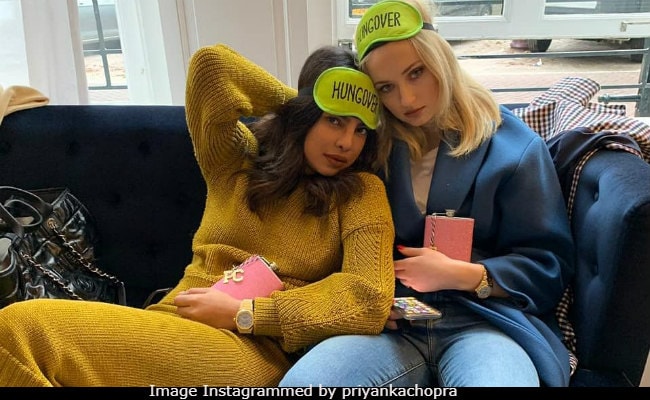 Looks like Priyanka Chopra has the best mom-in-law ever! What happens after a night of crazy partying (especially if it's your bachelorette) was explained by Priyanka Chopra in a new photo from Amsterdam. Priyanka, who will get married to Nick Jonas in a month or so, let her hair down at her bachelorette party in Amsterdam recently with her girl squad, after which she Instagrammed a The morning after" photo with future sister-in-law Sophie Turner (engaged to Joe Jonas), in which both Priyanka and Sophie sports 'hungover' eye masks. Nick Jonas' mom Denise was quick to spot the phot and leave this comment: "I know how to fix that!" Aww, isn't that adorable?

Soon after Priyanka Chopra took off for her bachelorette and shared a glimpse of her "bachelorette vibes" with her Instafam, she received a diktat of sorts (all in good humour, of course) from Denise Jonas, who left this comment on her post: "Be good," she wrote with a heart emoticon.

Photos from Priyanka Chopra's bachelorette party indeed look like a dream - the red and white themed party squad included Priyanka's work associates Natasha Pal, Chanchal D'Souza and Dana Supnick-Guidoni, her besties Tamanna Dutt and Srishti Bahl Arya, and cousin Parineeti Chopra and also another bride-to-be Isha Ambani. Here's how much fun "the red, white and the bride" squad had when in Amsterdam!

Umm well, we also spotted this comment by Nick Jonas on Parineeti's photo:

Featherweight Champion of the world...#Bachelorette#FauxNotFur@GeorgesChakrapic.twitter.com/7f0IWG6pbs

Last month wrapped with Priyanka Chopra's bridal shower at the Tiffany store in New York, which Nick Jonas reportedly had shut down to pick out a ring for his bride-to-be.

Priyanka and Nick Jonas officiated their engagement with a roka party in Mumbai in August and are reportedly looking forward to a December wedding in India's Jodhpur.