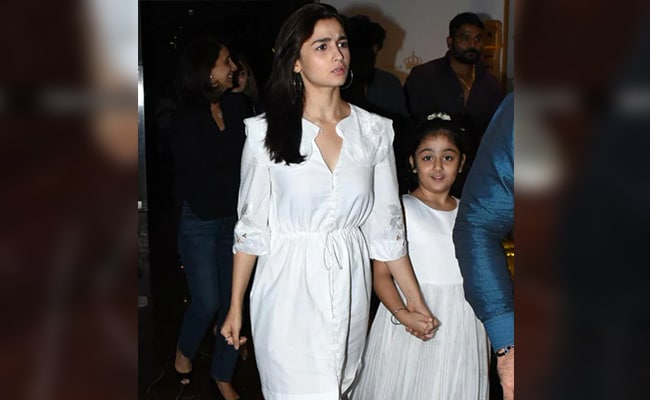 A throwback of Alia Bhatt with Samara Sahni in Mumbai.

Ranbir Kapoor's niece Samara Sahni  (daughter of Riddhima Kapoor and Bharat Sahni) welcomed Alia Bhatt to the family with a super cute post earlier this week. Sharing pictures from Ranbir Kapoor and Alia Bhatt's wedding festivities, Samara wrote in her caption: "Welcome to the family Alia mami. I love you so much." Days later, Alia Bhatt reacted to Samara's post. She commented: "Love you samuuuuuu" along with a couple of red heart emoticons." In the comments section, Samara's grandmother Neetu Kapoor wrote: "Awww this is the sweetest." Samara's mom Riddhima Kapoor Sahni dropped a couple of heart emojis. 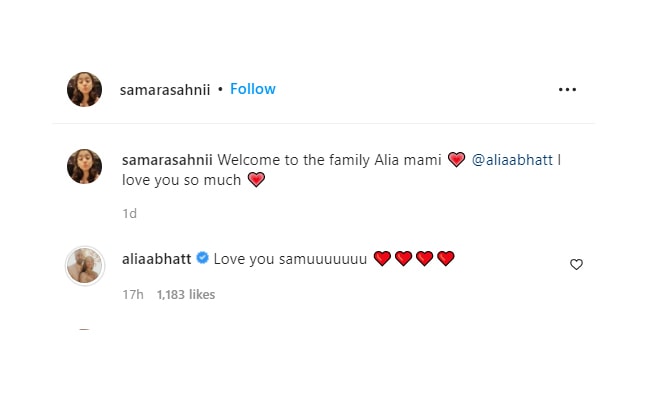 The couple got married last week at their house Vastu. Alia Bhatt shared pictures from the wedding and wrote: "Today, surrounded by our family and friends, at home ... in our favourite spot - the balcony we've spent the last 5 years of our relationship - we got married. With so much already behind us, we can't wait to build more memories together... Memories that are full of love, laughter, comfortable silences, movie nights, silly fights, wine delights and Chinese bites. Thank you for all the love and light during this very momentous time in our lives. It has made this moment all the more special. Love, Ranbir and Alia."

Alia Bhatt and Ranbir Kapoor's love story began in 2018 and they made their first public appearance together at Sonam Kapoor's wedding reception in the same year. While they were dating, both the actors were frequently spotted together and with each other's families as well. Alia and Ranbir were accompanied by their families during their Ranthambore holiday last year, while Alia Bhatt had been a frequent invitee to the annual Kapoors' Christmas brunches over the last few years.

Ranbir Kapoor, one of Bollywood's most private star, confirmed his relationship with Alia Bhatt in an interview in 2020, where he referred to her as his "girlfriend" and said that if it weren't for the pandemic, they would have been married.