How Cool Is This Pic Of Mahesh Babu And Ram Charan? 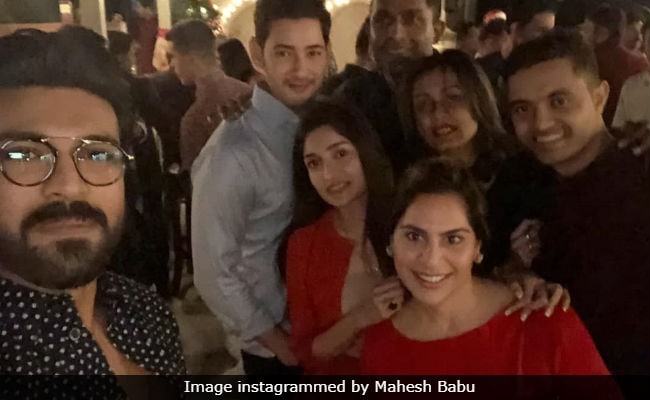 Mahesh Babu wrapped a schedule of his upcoming film Maharshi and threw a grand party, which also coincided with the Christmas party he hosted, along with his wife Namrata Shirodkar on Monday. Mahesh Babu posted a new picture from the double celebrations, which also featured his colleague Ram Charan. "Schedule wrap for Maharshi, a much-needed fun evening with friends and family! #whatmorecaniaskfor #holidayseason #december," Mahesh Babu captioned the post. In the picture, Ram Charan can be seen taking the selfie while Mahesh Babu, Namrata Shirodkar, Upasana Kamineni Konidela, Krishna R Bhupal and Dia Bhupal grouped together.

Upasana, wife of Ram Charan, also shared a glimpse of what "Mr C's Christmas with all the lovely ladies" looked like. The group included actress Kiara Advani and singer Kanika Kapoor:

Mr C's Christmas with all the lovely ladies #ramcharan

A post shared by Upasana Kamineni Konidela (@upasanakaminenikonidela) on Dec 26, 2018 at 8:56pm PST

Here are some more pictures from the Christmas party shared by Namrata Shirodkar:

Mahesh Babu, who was last seen in critically acclaimed Bharat Ane Nenu, is currently making Maharshi with director Vamsi Paidipally. A good chunk of the film was recently shot in the US, for which Mahesh Babu was accompanied by his wife Namrata and children Gautham and Sitara. Maharshi also stars Pooja Hegde and Allari Naresh in pivotal roles. The first poster and the teaser of the film released on Mahesh Babu's birthday in August.