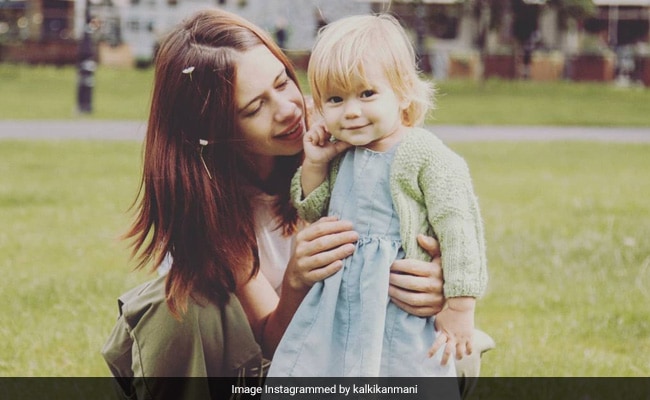 It's time for a collective meltdown over the Internet. Ask us why? We are simply enamoured by Kalki Koechlin's daughter Sappho. Kalki takes every opportunity to shower love on her daughter. Every time the actress makes a social media post about Sappho, we can't help but gaze at the adorable girl. Kalki's latest upload shows her crouching and hugging Sappho while the little girl smiles for the camera. The caption read, "This little light of mine." As if this wasn't adorable enough, Kalki added hashtags that read, "She got me wrapped around her finger", "Sappho and mama Kalki" and "she puts daisies in my hair." Isn't this super adorable?

We wait to get a glimpse of Sappho every now and then. We are all in for a surprise when Kalki Koechlin reunited with Guy Hershberg and their daughter. The meeting was documented in black and white photos that were shared on Kalki's Instagram timeline. In one pic, the couple walks under an umbrella while Kalki carries Sappho in her arms.

We couldn't miss noticing cute Sappho in an image where Kalki posed in a casual T-shirt. The photo shows Kalki Koechlin dressed in a comfy T-shirt that has the logo of the rock band "Nirvana" on it. While she looks lost in thought, Sappho seems to be busy at play. The black and white moment seems to have been taken at a messy verandah in Kalki's house. The caption read, "Perfectly captures my state of mind the past couple of months".

Sappho features in many funny posts by Kalki Koechlin. The baby girl was caught taking a nap with her hands over her eyes. Kalki posted this photo and wrote, "Yeh hafta kitna mushkil tha, oho [It was quite a tough week]." The actress dropped some hashtags saying "sleep it off," "thumbelina" and "she keeps us going."