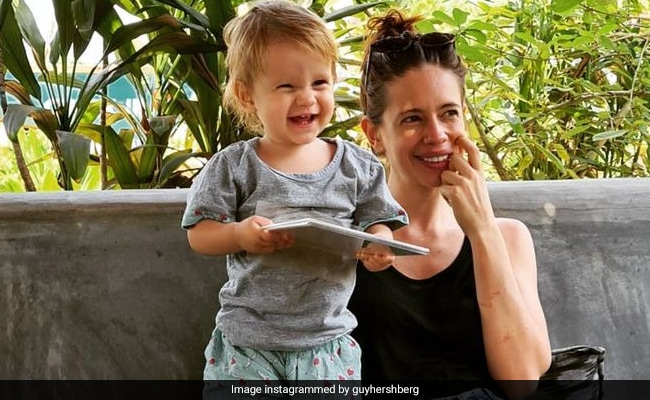 Kalki Koechlin's latest picture post on Instagram is practically all of us during the pandemic. The actress shared an adorable picture of her daughter Sappho on Instagram. We can see the little one having a sound sleep. Kalki gave this snap a meme twist by captioning it as, “Yeh hafta kitna mushkil tha, oho.” [It was a tough week]. The 37-year-old further dropped hashtags that read, “sleep it off,” “thumbelina” and “she keeps us going.” Kalki's fans and friends from the industry showered their love on the little one. Pagglait actress Sayani Gupta dropped heart emojis as a token of appreciation. Masti fame Tara Sharma found the snap “awww.”

Kalki has been proudly sharing her frame-worthy memories with Sappho on social media. Previously, the Zindagi Na Milegi Dobara star uploaded a cute photo from her playtime with the toddler on a beach. “Waiting with open arms for a ball that may or may not be passed back to you,” the caption read.

Beaches seem to be the favourite spot of Kalki's baby girl. In another picture, we see Kalki and her boyfriend Guy Hershberg spending some peaceful time with their little bundle of joy. The couple, who were in beach attire, can be spotted holding Sappho's hand as they move towards the waves. “Remembering good days,” was written in the sidenote.

There is also one more pictorial testimonial of how much Sappho enjoys her day by the seaside. In this frame, we can see the baby smeared in the sand with her toys scattered around in the background. “As far as nature's innovations go, sand is definitely underrated,” Kalki added in the description space.