Can You Guess Who Clicked This Pic Of Kalki Koechlin?

Kalki Koechlin is a sight to behold in her latest post 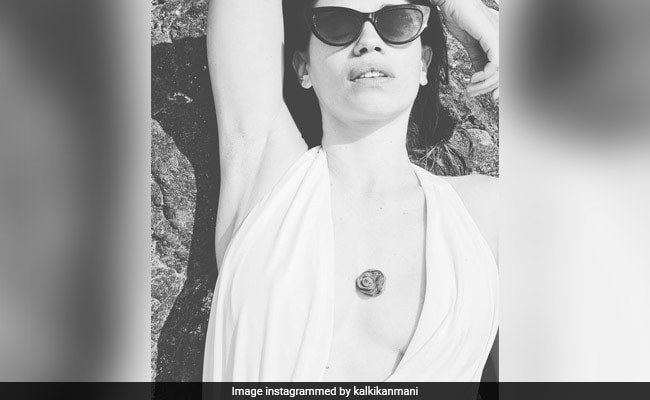 Actress Kalki Koechlin treated her fans to a stunning picture of herself on Wednesday and it was clicked by none other than her boyfriend Guy Hershberg. Kalki and Guy welcomed a baby daughter named Sappho in February last year. In her latest post, which is a black and white picture, Kalki looks gorgeous lying on a rock in a halter top with a plunging neckline. "A consideration for details... Clicked by Guy Hershberg #somewhereonarock," the actress wrote in the caption. Reacting to Kalki's post, her friends from film industry such as Radhika Apte, Sayani Gupta, Ira Dubey dropped heart eye icons in the comments section.

A couple of days ago, Kalki Koechlin shared this adorable picture of herself and her little daughter chilling by a pool:

And before that, she posted a picture of Guy Hershberg enjoying every bit of fatherhood with Sappho:

We can't get enough of this photo of baby Sappho:

Kalki Koechlin, who was previously married to filmmaker Anurag Kashyap, made her Bollywood debut with Anurag's Dev D in 2009. She also starred in Netflix's Sacred Games 2, which Anurag co-directed with Neeraj Ghewan. The actress has featured in a number of films such as Dev D, Shaitan, Zindagi Na Milegi Dobara, Shanghai, Yeh Jawaani Hai Deewani, Margarita With A Straw, A Death In A Gunj and Gully Boy among others.

She was last seen in the Love Panna Uttranum segment of Tamil anthology Paava Kadhaigal. Before that, Kalki's web-series Bhram also released on ZEE5.

Antim First Poster: In Salman Khan's Quest For "The Final Truth", Aayush Sharma Is The Face Of Evil