"Love in the time of corona," wrote Kalki 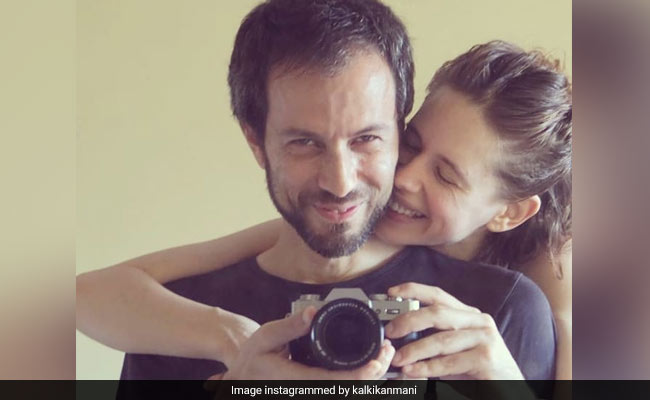 Actress Kalki Koechlin painted Instagram red with her latest post featuring boyfriend Guy Hershberg. The actress, on Thursday, shared a set of pictures of herself and Guy Hershberg from their lockdown diaries and it will surely give you major couple goals. In the photos, Kalki and Guy Hershberg can be seen clicking mirror selfies. In one of the shots, Guy can be seen giving a peck on the actress' cheek. Adorable, isn't it? Sharing the photos, Kalki aptly captioned them. She wrote: "Love in the time of corona" and added the hashtags #sefies and #yoursandmine in her post. Take a look:

Screenshot of Richa and Radhika's comments on Kalki's post.

Kalki Koechlin and Guy Hershberg welcomed their first child in February this year. We often get glimpses of their baby daughter Sappho on Kalki's social media profile. Lately, the actress has been sharing videos of herself singing lullabies to her little bundle of joy. We have selected a few for you, check them out:

Sharing our interpretation of Edith Piaf's sweet love song with a little improvising from Sappho.

Started learning the uke when I was pregnant to play songs for my baby. It's worked out well, Sappho either gets excited or falls asleep to them. This African lullaby was one of the first songs I learnt from an album called Songs of the Baobab. If anyone knows what the lyrics mean let me know! #mamadiaries #ukulele #sappho #covidtimes

Kalki Koechlin was previously married to filmmaker Anurag Kashyap but they divorced in 2015. She made her Bollywood debut with Anurag Kashyap's Dev D in 2009 and she has also starred in Netflix's Sacred Games 2, which Anurag co-directed with Neeraj Ghewan.

Kalki Koechlin has featured in a number of films and web-series such as Dev D, Shaitan, Zindagi Na Milegi Dobara, Shanghai, Yeh Jawaani Hai Deewani, Margarita With A Straw, A Death In A Gunj, Gully Boy and Sacred Games 2. She was last seen in web-series Bhram, in which she co-starred with Bhumika Chawla, Sanjay Suri and Eijaz Khan among others.