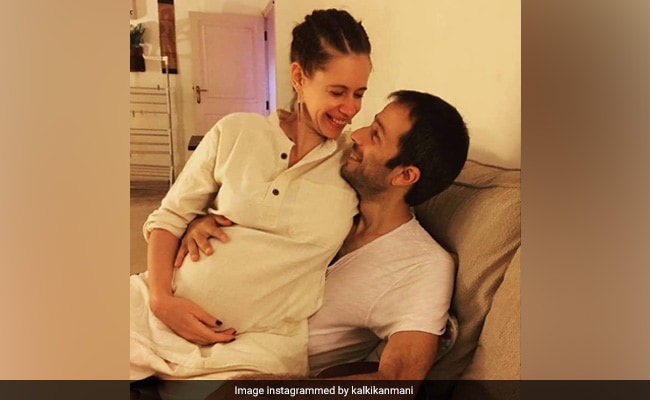 Bollywood actress Kalki Koechlin and her boyfriend Guy Hershberg reportedly welcomed their first child together - a baby girl on Friday night, reported Hindustan Times, Times Of India and several other publications. The official confirmation from Kalki and Guy Hershberg is yet to come. Kalki announced the news of her pregnancy in an interview in September last year. The 36-year-old actress also revealed that she had zeroed in on the idea of a water birth.

Kalki frequently delighted her fans with posts related to her maternity diaries. A few weeks ago, the actress summed up her pregnancy mood and wrote: "Blowing up like a balloon of anticipation, coloured by YouTube videos of birth stories, birth center updates, a long list of heavy books, the endless advice of mothers who know better and the black hole of WhatsApp spamming from various sources as I wait for my own version of this age old story to unfold."

Blowing up like a balloon of anticipation coloured by YouTube videos of birthstories, Birthcentre updates, a long list of heavy books, the endless advice of mothers who know better and the black hole of Whatsapp spamming from various sources as I wait for my own version of this age old story to unfold... Photo @yashyeri Assisted by @vaibhav_dabholkar_ Style @divyabal HMU @angelinajoseph #9monthseries #notesfromapregnantdiary #filmnotdigital #noretouching

Here are some more posts from Kalki Koechlin's pregnancy diaries:

Love and hate. Seems to be everywhere these days. A world wide debate. But I don't need to look far to find it. I see this cycle of love and hate in my own family. We curse eachother and scream and shout and break things, until we ourselves break. Then we cry, feel the guilt and look down at our feet. We hug gingerly, love reluctantly and forget quickly until it is repeated again. Love and hate. A habit. Like two magnets, in constant repulsion. Perhaps the opposite of hate is not love, but understanding. And the opposite of love is not hate, but neglect. There are so many uncomfortable extremes that make us feel we must react at once and put a stop to it - slam the door, walk away, shout your way to the other person's silence, unleash unthinkable acts of violence. But living with discomfort all the time, as I do now, because it is inside me and I cannot escape it, I have to be patient. My body demands it, my mind shuts down, my heart can only beat. If I erupt, it is inward and I alone feel the heat. I feel small, very small, from the sheer mystery and unfamiliarity of the grand workings taking over inside me. And so, eventually, I'm reduced to baby steps, forced to listen and respond, to note down and break years of habit in this moment. Today the cycle will not repeat. Today I will plant a seed, allowing my intentions to grow into another being - another me, but more conscious, more careful . I feel as if this creature, which began as a virus of discomfort inside me, slowly threatening my independence, stalling my capacity to create, or to think for myself, and eating into my daily routine, is now firmly a mirror of my own insecurities, a counter to my fears, a soul that can evolve and grow more rapidly than I have in all my years. So perhaps the opposite of destruction is not creation, but simply balance. And the opposite of creation is not destruction, but constant distraction. So I sit and wait. Write and read. Try to keep my balance. And breathe. Because that's all I can get right sometimes. #notesfromapregnantdiary #9monthseries Photo @yashyeri Assisted by @vaibhav_dabholkar_ Style @divyabal HMU @angelinajoseph Dress @_naushadali_

What a rollercoaster this pregnancy has been! Listen to this week's podcast where I talk to Mercy, host of Parentland, on #myindianlife about it all. Link in bio. #kalkipresentsmyindianlife #parentland #podcast @bbcworldservice

Kalki Koechlin was previously married to filmmaker Anurag Kashyap. They got divorced in 2015.

Kalki Koechlin stepped into Bollywood debut with Anurag Kashyap's 2009 film Dev D, co-starring Abhay Deol and Mahie Gill. She is best-known for her performances in films such as Margarita With A Straw, Yeh Jawaani Hai Deewani, Zindagi Na Milegi Dobara, Shaitan and That Girl In Yellow Boots among many others. She famously featured in the web-series Made In Heaven and Netflix series Sacred Games 2.