Guess Who's The "Mini Shrek" In This Photo? Suhana Khan Knows The Answer

The photo has received loved up comments from Bollywood celebrities, including Suhana Khan. 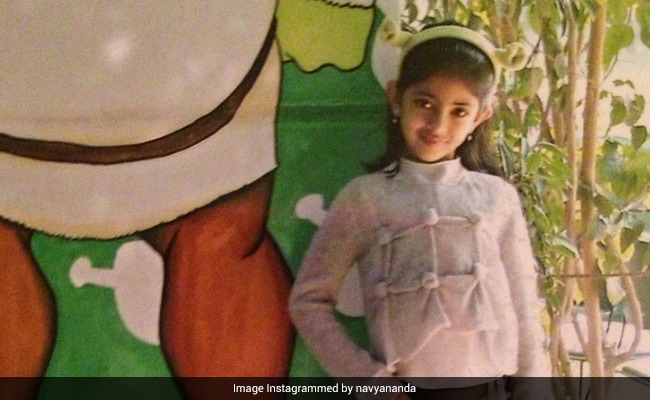 You can't show us a photo that can be cuter than the childhood photos of Navya Naveli Nanda. The star kid and entrepreneur has always had a charm of her own. And, her childhood snapshots prove it to us. Her Instagram timeline is full of these cute images. Navya has dropped yet another adorable snapshot from her younger days. In the post, we see little Navya dressed in a grey pullover with a brown skirt, stockings, green headband and black buckled shoes. Even at that young age, Navya was confident enough to look straight into the camera and smile for the photo. The caption read, “Mini Shrek” and had a green heart emoji. It seems she is standing in front of a wall that has the animated cartoon character, Shrek, painted on it.

Navya's BFF Suhana Khan lost no time to leave her comment on the post. She wrote, “Qt.” We surely agree. And, so does Sonali Bendre, who commented with two red heart emojis. Maheep Kapoor also left heart-eye emojis.

Navya Naveli Nanda followed this Instagram post with a rather quirky and thoughtful post. She posted a recent photo of herself. As she smiles for the camera, she flaunts a T-shirt with a deep message. Navya wrote, “Ka se (K for)…? Consent. Use it. Ask for it.” Her mother Shweta Bachchan commented, “Cute.” Zahan Kapoor said, “So good. Can I also get a tee shirt?”

Navya Naveli Nanda's posts often stop the traffic on social media. When she dropped a photo of some beautiful hills. The picture screamed wanderlust. Once again, Suhana Khan stole the words from our mouths as she wrote, “Wow.”

Navya Naveli Nanda also made headlines by reacting to rumoured boyfriend Siddhant Chaturvedi's post. When the actor shared a shirtless photo of himself on Instagram, Navya simply pushed the like button and left us speculating once again.