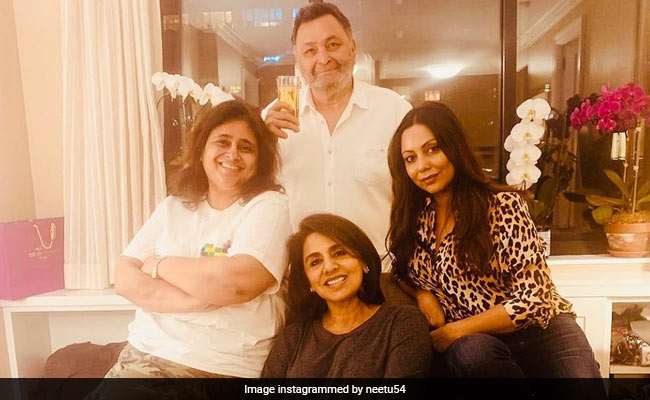 Gauri Khan, currently in New York with her daughter Suhana Khan (who recently joined class at New York University (NYU)), met Rishi Kapoor and Neetu Kapoor during her visit. We got a glimpse of her meeting with the Kapoors through Neetu Kapoor's Instagram post. Neetu Kapoor shared a post from their meeting with Gauri on her Instagram profile and she thanked her and Shah Rukh Khan for their extensive support through tough times. Neetu Kapoor captioned her post: "What helped us in this tough phase were some very beautiful, lovely and good people. Gauri and Shah Rukh, love you both." In her post, Neetu Kapoor also thanked her family friend Kaajal Anand and added, "she is family, love her."

What helped us in this tough phase was some very very beautiful Lovly n good pple !!! Gauri Shahrukh love you both @putlu is family love her

Shah Rukh Khan, who is currently in Mumbai, visited the Kapoors during his New York visit in May this year. The actor, who was in the Big Apple to shoot for an episode of David Letterman's Netflix talk show My Next Guest Needs No Introduction, managed to scoop some time from his busy schedule and visited Rishi Kapoor. Neetu Kapoor shared a picture from the meeting on Instagram and she wrote: "To make people feel good about themselves is a rare quality. Shah Rukh Khan is all of that, His love care is so genuine. Besides his amazing work, I admire him as a very good and a real human being."

Rishi Kapoor and Neetu Kapoor moved to New York in September last year. During their stay in the city, the couple were visited by several Bollywood stars including Aamir Khan, Deepika Padukone, Priyanka Chopra, Alia Bhatt, Vicky Kaushal and Karan Johar among others. Rishi Kapoor is expected to return to India soon.