Suhana Khan is living the London dream with mom Gauri 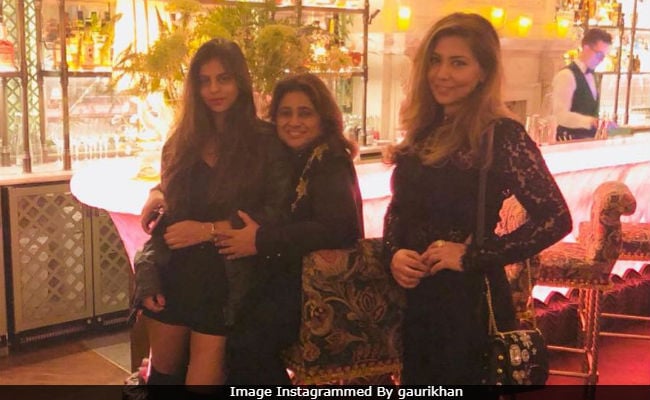 New Delhi: Suhana Khan is living the London dream with mom Gauri and her close friends. Gauri recently shared a stunning picture of Suhana from a club in London captioned it as, "The British charm." Suhana looks chic in an all-black outfit, which she paired with knee-length boots. Suhana shares the frame with family friends Kaajal Anand and Seema. (Suhana is just so stylish and charming, indeed). Gauri's post has been liked by her close friends like Maheep Kapoor, Bhavana Panday and other celebs like Amrita Arora and Vaani Kapoor. Earlier this week, she had posted a similar picture of the trio with Shweta Bachchan Nanda. Yes, she's in London too.

Suhana, now 18, is the middle child of SRK and Gauri, who married in 1991. Suhana's elder brother Aryan, 19, is studying films in California while the younger one AbRam, 5, is attending Dhirubhai Ambani International School in Mumbai.

For Suhana's 18th birthday, her parents had posted these.

Like all daughters, I knew you were always meant for flying...and now u can also legally do what u have been doing since u were 16...!! Love u.

Gearing up for a birthday bash... Thanks @karanjohar Pic credits: @avigowariker

Promoted
Listen to the latest songs, only on JioSaavn.com
Suhana aspires to become an actress, Shah Rukh Khan had earlier revealed to DNA. "Suhana wants to be an actress. I see that zeal in her. She's extremely good on stage, I've seen her performances. She's admittedly a cinema fan and wants to be in the industry. But my point is simple - you need to complete your education before doing anything," he had said.

Meantime, while Gauri and Suhana are in London, Shah Rukh Khan is reportedly in the US to shoot for his work-in-progress film Zero, also starring Katrina Kaif and Anushka Sharma.