For Priyanka Chopra's Birthday, Nick Jonas May Be On To Something Big. These Pics Are Proof 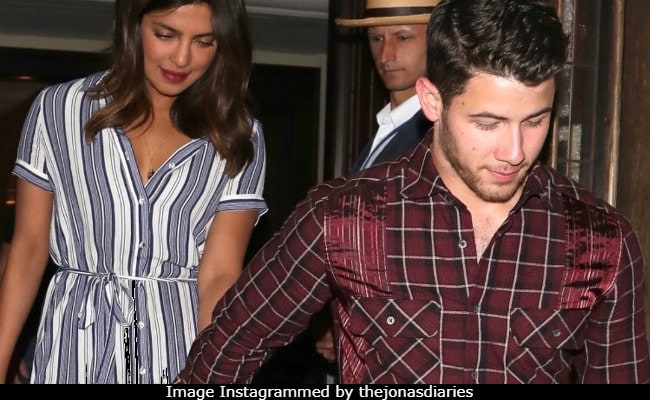 Will Priyanka Chopra ring in her birthday with Nick Jonas in London? Or will she fly off to some unknown island destination? There's no way to tell for now but on Monday evening, the paparazzi spotted the duo exiting 34 Mayfair, an eatery in the British capital, hand-in-hand. It was a double date sort of an evening. In photos which are viral on social media, it can be seen that Priyanka and Nick were joined by the 25-year-old singer's brother Joe Jonas and his fiancee Sophie Turner. For the date night, Priyanka opted for a striped buttoned down dress while Nick shed his usual cool and casual fashion game to opt for a shirt and trouser combo. Joe and Sophie, both casually dressed for the evening, too walked hand-in-hand.

Nick and Priyanka in London

#Jophie out for dinner in London

The only thing that could steal some of the limelight from the rumoured couple was that there was much of a leg-show on the Priyanka Chopra corner with those thigh-high slits.

After seeing these two paint the town red, many must be wondering what would be the beach spot, which reports had earlier mentioned about as the speculated birthday destination for Priyanka. A source recently told DNA that Nick has already made bookings at an undisclosed location for Priyanka's birthday vacation. "Nick has apparently made special plans for a quick getaway to one of Priyanka Chopra's favourite beach destinations. He's already made the bookings, but no one knows of the destination yet," DNA quoted a source as saying.

A closer look at Priyanka's roster appears to show that she may have set her work roster in the US to slice out time for a birthday trip. Priyanka wrapped the shooting of Isn't It Romantic, her film with Liam Hemsworth, in Manhattan on Sunday, after which, she left for London.

Priyanka was spotted hanging out with the Joe brothers and Sophie Turner even earlier - they celebrated 4th of July together. She was also Nick Jonas' plus one at his cousin's wedding. Nick also bonded with Priyanka's mother Madhu Chopra, brother Siddharth and cousin Parineeti Chopra during his visit to India. Priyanka brought Nick to the Maximum City last month, when they went out on dates, attended an Ambani party together and went to Goa for a weekend getaway. After that, Priyanka also accompanied Nick to his concert in Brazil before resuming her work commitments.

In the professional sphere, Priyanka Chopra has just returned to Bollywood with The Sky Is Pink with Farhan Akhar. Next up, she has Salman Khan's Bharat. Priyanka's US TV show Quantico will wrap with the third season, which it is currently on. In Hollywood, Priyanka has A Kid Like Jake and Isn't It Romantic in the pipeline.

Promoted
Listen to the latest songs, only on JioSaavn.com
Comments
priyanka chopranick jonas