For Priyanka Chopra, "Dancing Into The Weekend" Be Like This Clip 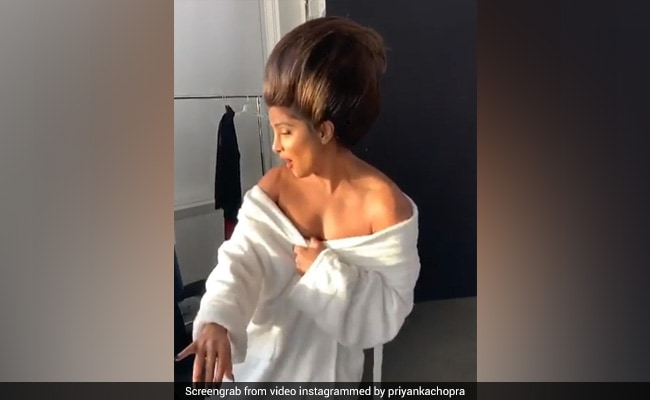 Just like the rest of us, Priyanka Chopra is also happy that the weekend wait is finally over and her latest post on social media proves it. The actress shared a video of herself "dancing into the weekend" on Friday evening (Saturday morning in India) and it will surely drive away your lockdown blues. In the throwback clip, Priyanka can be seen dancing to rapper Missy Elliott's track Get Ur Freak On in a bathrobe. Her quirky hairstyle will remind you of the most adorable cartoon character from the 2016 animated film Trolls - Princess Poppy. Sharing the video, Priyanka Chopra wrote: "Dancing into the weekend. There is always something to be grateful for" and added the hashtags #flashbackfriday #getyourfreakon and #princesspoppyvibes.

The post is a BTS video from Priyanka's photoshoot for the Tatler magazine. She was the cover girl for the May issue of the magazine. Check out her latest post here:

Priyanka Chopra is currently living in Los Angeles with her husband Nick Jonas during the lockdown. She recently shared a picture of herself from her "first day out" after 2 long months. Take a look:

On the work front, Priyanka Chopra was last seen in The Sky Is Pink, in which she co-starred with Farhan Akhtar, Zaira Wasim and Rohit Saraf. She has featured in a couple of Hollywood films and series like Quantico, Baywatch, alongside Dwayne Johnson and Zac Efron, A Kid Like Jake and Isn't It Romantic. Priyanka Chopra has Netflix's superhero film We Can Be Heroes and a film with actress-comedian Mindy Kaling lined-up.