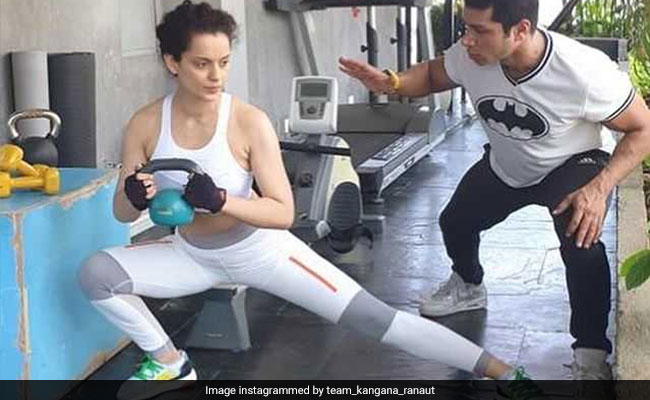 Kangana Ranaut sweating it out at the gym. (Image courtesy: team_kangana_ranaut)

Kangana Ranaut is on a transformation spree for this year's Cannes Film Festival but did you know that the actress lost 5 kgs in just 10 days to look her best at the French Riviera? Yes, you read that right! A series of posts shared by the actress' team of Instagram reveal that the actress has been sweating it out in the gym to get in perfect shape for the Cannes Film Festival. On Wednesday, the actress' team shared a collage on Instagram, in which an old picture of Kangana was juxtaposed with a recent one and the caption on it read, "What a transformation! Kangana Ranaut lost 5 kgs in just 10 days, just in time to fit into couture."

Yaas. WHAT a transformtion! #KanganaRanaut lost 5kgs in just 10 days, just in time to fit into couture. . . #cannesfilmfestival #cannes2019

In a separate post shared by the actress' team, Kangana can be seen working out in a gym along with her trainer. "The grind is real. This is what it takes to get red carpet ready for Cannes," read the caption on the post and it was accompanied with the hashtags "#Cannes2019" and "#KanganaAtCannes."

The grind is real. This is what it takes to get red carpet ready for cannes.#Cannes2019 #KanganaAtCannes

Here's another picture from Kangana Ranaut's preparatory session for Cannes. The caption on the post read, "Queen is all set to rock! Kabaddi to Cannes, hats off to her determination."

Kangana Ranaut, who represents the vodka brand Grey Goose, will be attending the Cannes Film Festival for the second time. In a recent interview with news agency IANS, the Manikarnika actress shared her experience at the French Riveiera last year and said, "Following an exhilarating debut last year at the Cannes Film Festival, I am looking forward to representing Indian cinema at such a prestigious platform with the global icon of luxury yet again. I made many lifelong memories, inclusive of both big and small moments."

Cannes Film Festival is scheduled from May 14-May 25 this year and Kangana will be present at the festival from May 16-May 18.