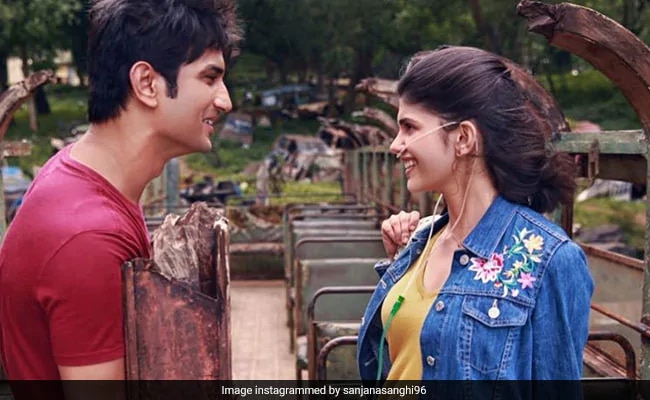 Ahead of the release of Dil Bechara - late actor Sushant Singh Rajput's last project - we have curated a list of everything that we know about the film. From what the film was originally called, to how the film's cast was zeroed in - the list has it all. The film, which is set to release on July 24 on streaming platform Disney+Hotstar, will be available to subscribers as well as non-subscribers of the platform as a tribute to the late actor. Nothing beats the sheer happiness of seeing late actor Sushant Singh Rajput creating magic on screen for the last time and the film Dil Bechara will keep the late actor's legacy alive. Forever.

The title of the movie perfectly encapsulates the essence of the film. Did you know that the film, which went on floors in the year 2018, was first titled Kizie Aur Manny? The title was based on the names of the film's lead characters. Manny or Immanuel Rajkumar Junior, played by late actor Sushant Singh Rajput and Sanjana Sanghi as the titular Kizie Basu. However, the makers went with Dil Bechara as the final title.

Dil Bechara is inspired by John Green's book The Fault In Our Stars, which was also adapted into Hollywood film with the same name and it featured Shailene Woodley and Ansel Elgort in the lead roles. In the film, Sushant's character is inspired by Augustus, while Sanjana Sanghi will be seen in Hazel Grace's shoes in the film.

AR Rahman Has Composed The Music For The Film

Oscar-winning composer AR Rahman has made the music for the film. "When I heard the narration of their Indian adaptation of The Fault In Our Stars and especially how music is so beautifully woven into the narrative I got quite excited," AR Rahman had earlier told news agency PTI.

The film's lead actress Sanjana Sanghi, who has been a part of films like Hindi Medium and Imtiaz Ali's Rockstar, was spotted first by the film's director Mukesh Chhabra when she was 13-years-old. She was spotted by the casting director during one of her performances in school. 10 years later, she stars as the lead actress in Mukesh Chhabra's forthcoming film, which also marks his directorial debut.

At age 13, Mukesh found me performing on stage in my school in Delhi, asked me to 'audition' then & there itself, and went on to cast me as "Mandy" in Rockstar. Many magical things happened during Rockstar, but one of the biggest was AR Rahman's Sir's music. If you'd have told me 10 years later he'd bless my debut film as a lead actor Dil Bechara, which will be based on my favourite novel The Fault in Our Stars - with HIS music on our album and background score.? That would not even be a dream I'd have ever dared to dream. Thank you @arrahman sir, for this eternal blessing, this is an absolute honor. I've pinched myself a million times since I first performed to your tunes almost two years ago, yet it just doesn't sink in. Here's my greatest honor in presenting to you all, the FULL music album of Dil Bechara! Lyrics penned by the genius @amitabhbhattacharyaofficial Link in bio. #SushantSinghRajput @mohitchauhanofficial @shreyaghoshal @arijitsingh @sashasublime @jonitamusic @hridaygattani @sunidhichauhan5 #SanaMoussa @therajakumari @adityanarayanofficial @poorvikoutish @foxstarhindi @disneyplushotstarvip @sonymusicindia @castingchhabra

The Film's Title Track Was Shot In A Single Take

The title track of Dil Bechara, sung and composed by AR Rahman and choreographed by Farah Khan, was shot in a single take. Farah Khan also did not charge any fee for choreographing the song and rewarded Sushant Singh Rajput with some homemade food. The song garnered a lot of love from fans on social media.

This song is particularly close to me because it was the first time i was choreographing Sushant.. we were friends for a long time but never worked together.. i had also promised Mukesh chhabra that whn he makes his directorial debut I would do a song for him.. i wanted the song to b done as a 1 shot song because i knew Sushant would b able to do it perfectly.. i remembred Sushant had once come to a reality dance show that I was judging as a celebrity guest and that's the only time the celebrity guest danced better than the contestants on that show.. we rehearsed a whole day n then finished shoot in half a day ! As a reward for nailing it perfectly all Sushant wanted was food frm my house which i duly got for him..i see the song n all i can see is how Alive, how happy he looks in it.. yes this song is very special to me.thank u @castingchhabra for including me on this journey of urs. https://bit.ly/DilBecharaTitleTrack. Watch on my INSTASTORY pls... #missusushantsinghrajput

Dil Bechara also features Saif Ali Khan in a cameo appearance. The film was earlier slated to release on May 8. However, its release was postponed due to the coronavirus pandemic. The film is finally releasing tomorrow on Disney+Hotstar.