Eat, Nap, Repeat: Kareena Kapoor Breaks Down The Stages Of Her "Productive Weekend" With Sister Karisma 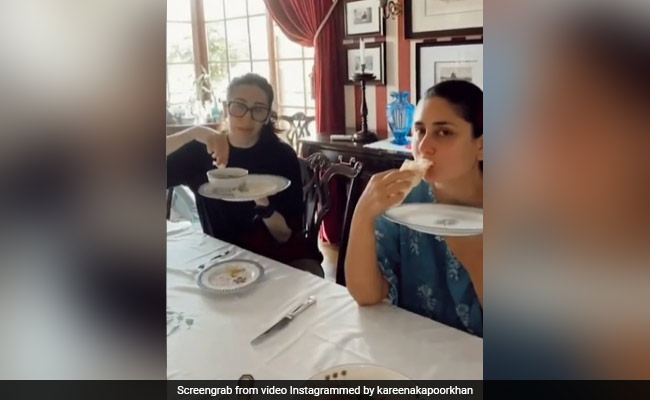 Kareena and Karisma in a still from the video. (courtesy kareenakapoorkhan)

Can we please stick to Kareena Kapoor's definition of a "productive weekend"? Well, the actress decided to spend her Sunday with sister Karisma Kapoor  and she decided to document it on social media. Kareena Kapoor posted a reel, in which she and Karisma Kapoor can be seen digging into a meal and devouring desserts. What happened 10 seconds later... Well, the obvious. They sister -duo took a nap. Sharing the video, Kareena Kapoor wrote: "What I mean when I say... 'Lolo and I had a productive weekend'," adding the hashtags#Reels, #ReelItFeelIt, #NationalSistersDay and #MyLoloIsTheBestest.

Karisma also posted a throwback with Kareena Kapoor  and she wrote: "Always at it together. Sisters... Making hard times easier and easy times more fun."

In terms of films, Karisma Kapoor was last seen in the 2012 film Dangerous Ishhq, after which she featured in special roles in films such as Bombay Talkies and Zero. Karisma Kapoor's last project was ALTBalaji's web-series Mentalhood.