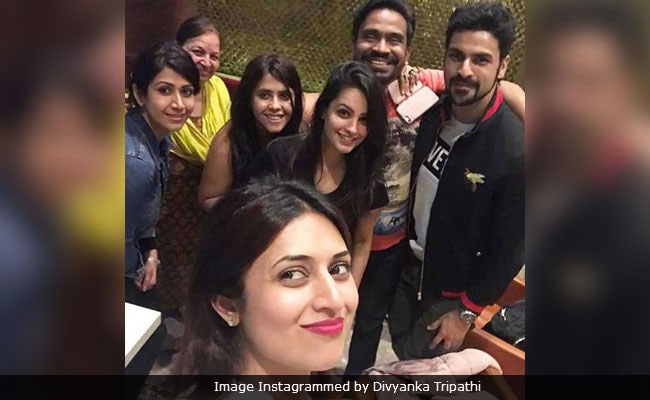 New Delhi: TV actress Divyanka Tripathi, who is popularly known as Ishita of Star Plus' show Yeh Hai Mohabbatein, is all set to have a great time in Budapest with her show's team. The picture shared by Divyanka on Instagram today revealed that she is off with her Yeh Hai Mohabbatein team, which include actress Anita Hassanandani (who plays Shagun in the show), Aditi Bhatia (who plays Ruhi Bhalla), Abhishek Verma (who plays Aadi Bhalla) and producer Ekta Kapoor. The team will reportedly shoot a couple of episodes in Hungary's capital - Budapest. Not only the actors of the show but Divyanka is also accompanied by her husband Vivek Dahiya and her co-star Karan Patel's wife Ankita. We definitely know that it would be a great mixture of friends, work and travel in Budapest.

Here's a picture of Divyanka with her friends and team, who are all smiles:

A post shared by Divyanka Tripathi Dahiya (@divyankatripathidahiya) on Oct 24, 2017 at 4:29am PDT

Take a look at some beautiful pictures shared by Divyanka and Vivek here:

Group travel shenanigans as we set off to explore one more destination on our bucket list! And this time it's with close friends and colleagues! Budapest here we come! #LoveTravelling

Candid pictures are the most loved ones. Thanks for this one @i.m.abhishekk.

A post shared by Divyanka Tripathi Dahiya (@divyankatripathidahiya) on Oct 24, 2017 at 7:34am PDT

A fan club on Instagram also delighted us with some of the sneak peeks of Yeh Hai Mohabbatein's team, who can be seen super excited to have a ball in Budapest.

Divyanka and Vivek posed for a happy picture at the airport and Divyanka also looked elated with her on-screen children - Ruhi and Aadi.

A post shared by AnkitaKDivyankaAnita (@teenbahuraniyaan) on Oct 23, 2017 at 5:37pm PDT

Anita Hassanandani will have double fun in Europe - with her team and her mother.

A small clip, where Anita is introducing her fans to her Yeh Hai Mohabbatein's crew:

Ankita took a selfie in the plane minus her husband Karan Patel, who plays the role of Ishita's husband Raman Bhalla in Yeh Hai Mohabbatein.

A post shared by AnkitaKDivyankaAnita (@teenbahuraniyaan) on Oct 23, 2017 at 5:38pm PDT

Currently, in the show, it is seen that, Ruhi's relationship with her family is going through a rough patch. Ruhi wants to get married to Nikhil but the entire Bhalla family is against the idea, as Nikhil is already married is a father to a child. It is also reported that the show will take a leap of one-and-a-half years.

Earlier, the team also shot a sequence and a couple of episodes in Adelaide, South Australia.

Promoted
Listen to the latest songs, only on JioSaavn.com
Here are some of the pictures, shared by Divyanka from her Australia diaries:

A place in Australia where we would love to shout INDIA INDIA.. Shooting in #OvalAdelaide with handsome @karan9198.

A post shared by Divyanka Tripathi Dahiya (@divyankatripathidahiya) on Nov 12, 2016 at 6:09pm PST

A post shared by Divyanka Tripathi Dahiya (@divyankatripathidahiya) on Nov 13, 2016 at 1:33pm PST

We already can't wait to see the twist that's coming up in Yeh Hai Mohabbatein. Stay tuned to know what Divyanka and her team has in store for us.