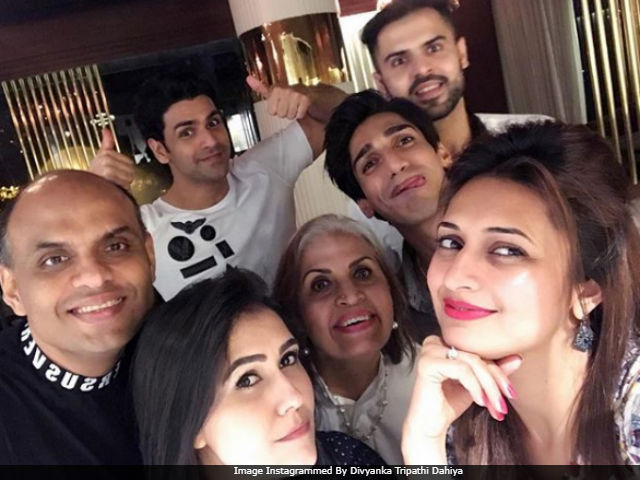 New Delhi: Television's star couple Divyanka Tripathi Dahiya and Vivek Dahiya recently visited Arth, a restaurant in Mumbai, designed by Gauri Khan. Divyanka, 32, shared pictures from her dinner date with Vivek, Sandiip Sikcand (creative director her show Yeh Hai Mohabbatein), his wife Veenaa and friends. Arth was designed by Gauri, wife of superstar Shah Rukh Khan, a few months ago. The restaurant's launch party was headlined by SRK, their daughter Suhana and many top-rated stars of Bollywood. "After a vegetarian's delight dinner... Happiest me! Still dreaming food," Divyanka captioned one of her posts featuring her and the gang. (Vivek, we loved your expression).

Here are the pictures shared by Divyanka.

A post shared by Divyanka Tripathi Dahiya (@divyankatripathidahiya) on Sep 26, 2017 at 9:38pm PDT

A post shared by Divyanka Tripathi Dahiya (@divyankatripathidahiya) on Sep 26, 2017 at 11:05pm PDT

Some pictures from the dinner have also been shared by Sandiip and Veena also.

Divyanka Tripathi and Vivek Dahiya fell in love on the sets of Yeh Hai Mohabbatein, headlined by the actress. It was Vivek's debut television show. The duo married last year in July in Bhopal and celebrated their first anniversary in Europe, which was also their honeymoon destination. Vivek featured as a cop in Yeh Hai Mohabbatein while he was the main lead in Kavach...Kaali Shaktiyon Se, which went off air in 2016. The couple also won the dance reality show Nach Baliye 8 this year.