Deepika Padukone And Kartik Aaryan, In A Chatty Mood, Discuss A "Fun Film" And More

"May we sign a fun film together this year," Deepika Padukone wrote on Kartik Aaryan's birthday 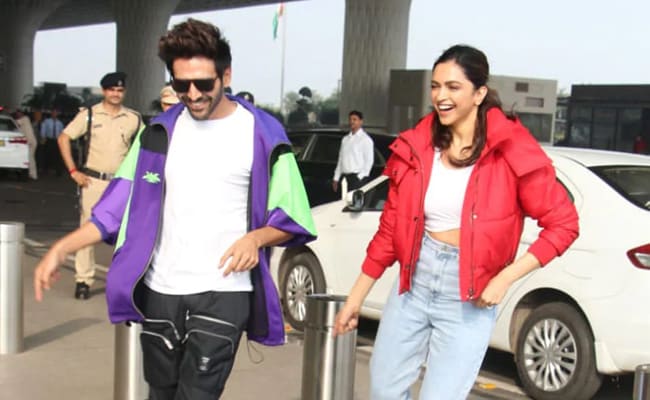 We just can't seem to get enough of Deepika Padukone and Kartik Aaryan's Instagram exchanges. Why, you ask? Well, to begin with, their conversations are usually replete with humour. Secondly, the duo might be seen together in a film (going by their recent chat). It all started with a birthday wish. On Kartik Aaryan's 30th birthday, Deepika wished the actor on her Instagram story and she wrote: "Happy Birthday, May we sign a fun film together this year." Kartik Aaryan, a self-confessed fan of Deepika Padukone, responded to the actress' greeting with these words: "Aap bas dates taiyyar rakho, fun and film mai laa rha haun." Deepika was quick to reply to Kartik. She wrote: "Sir, mere sare dates apke." 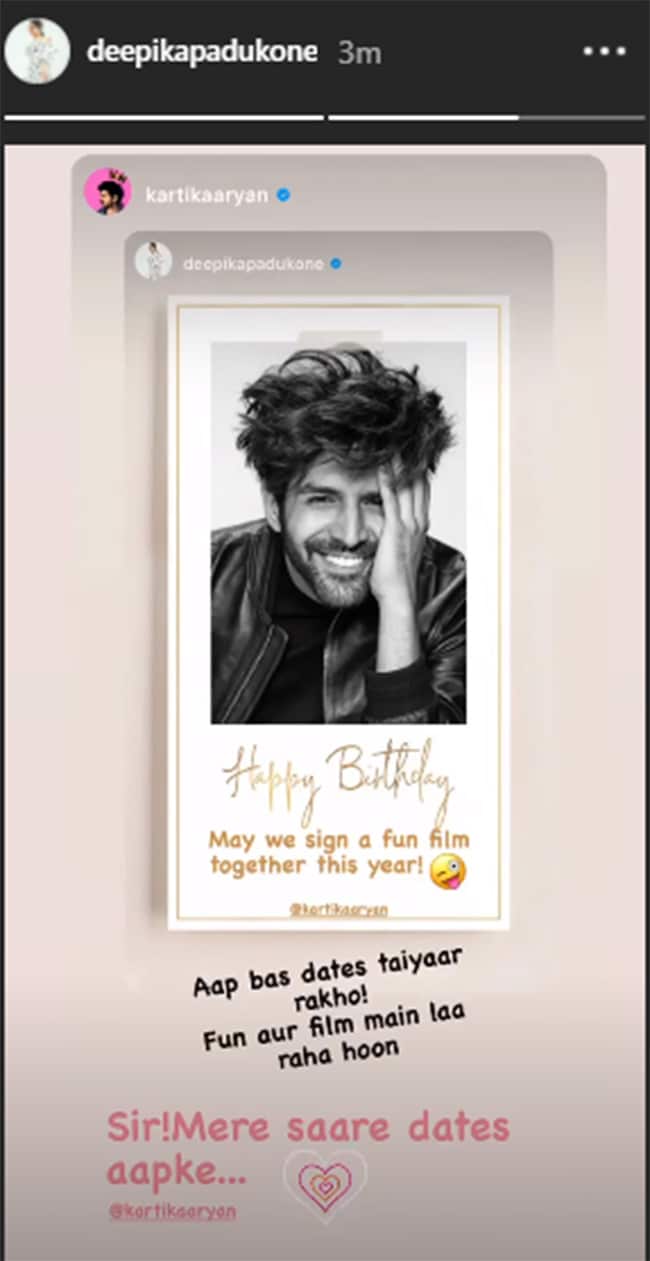 Kartik Aaryan revealed in an Instagram Live session earlier this year that he wants to get married to someone like Deepika Padukone. The actor, when asked by a fan about the kind of life partner he would want to spend his life with, said: "I think someone like Deepika Padukone, the way she is." Referring to Deepika's loved-up posts for her husband, actor Ranveer Singh, Kartik added: "One who likes to show-off her husband."

Kartik Aaryan and Deepika Padukone also trended big time on social media in December last year after the actress invited him at the Mumbai airport to learn the signature step of the song Dheeme Dheeme from his film Pati Patni Aur Woh.

Deepika Padukone was last seen in Chhapaak. The actress has signed the Hindi remake of the 2015 film The Intern, which was meant to star late actor Rishi Kapoor. The revised cast of the film has not been announced as of now. The actress has also signed a film opposite Prabhas, which will also feature Amitabh Bachchan. She will also be seen in Shakun Batra's untitled film, starring Siddhant Chaturvedi and Ananya Panday.

Kartik Aaryan stepped into Bollywood debut with Luv Ranjan's Pyaar Ka Punchnamaand he has been a part of movies such as Pyaar Ka Punchnama 2, Kaanchi-The Unbreakable, Luka Chuppi , Guest Inn London and Sonu Ke Titu Ki Sweety. He was last seen in Love Aaj Kal, opposite Sara Ali Khan. The actor will next be seen in Bhool Bhulaiyaa 2, co-starring Kiara Advani and Tabu. He has also signed the second installment of the 2008 film Dostana, co-starring Janhvi Kapoor and newcomer Lakshya Lalwani. The actor announced his new project Dhamaka on his 30th birthday.