Darlings: The film has been co-produced by Alia Bhatt and Shah Rukh Khan 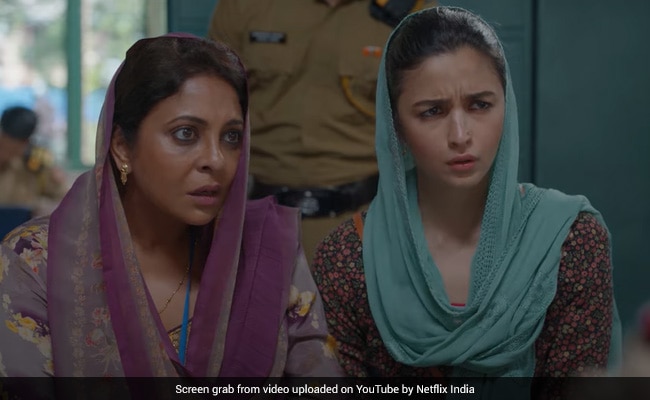 Darlings: Alia and Shefali Shah in the teaser. (courtesy: YouTube)

Once upon a time, there was a fable that was the definition of dark and had hints of comedy too. Darlings it was called. So the teaser of Alia Bhatt 's production debut Darlings released on Tuesday and it is as intriguing as it gets. The teaser begins with Alia Bhatt watching a movie in a theatre, when a voiceover begins to tell the story of a frog resting by a river, who happens to befriend a scorpion. Alia Bhatt and Vijay Varma are the metaphorical frog and scorpion, going by the narrative but their roles are not defined. Another scene features Shefali Shah and Alia Bhatt smiling with all their hearts while Vijay Varma looks perplexed. In a couple of scenes, Alia Bhatt and Shefali Shah are seen sitting in a police station, when Alia says, "The killing was just in our imagination." The highlight of the film is the stellar star cast and the undertones of humour in a dark, dark world. We can't wait to meet these 'Darlings' soon.

Check out the teaser of Darlings here:

Ahead of the the teaser's release, Alia Bhatt shared this video, all bit eclipsed by darkness and she wrote: "Thoda dark ... thoda comedy. Darlings teaser out tomorrow."

Meanwhile, Netflix India shared this quirky poster featuring Alia Bhatt and Vijay Varma and the caption on the poster read: "Kya ek meindak aur bichhoo dost ho sakte hain? (Can a frog and a scorpion be friends). Darlings, watch on 5th August, only on Netflix."