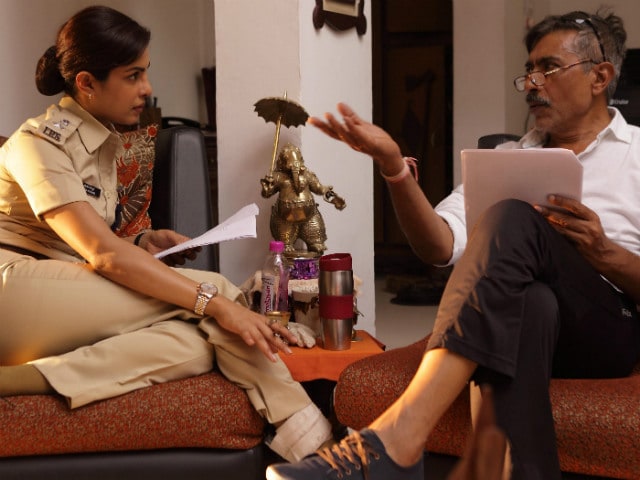 Priyanka Chopra with director Prakash Jha on the sets of Jai Gangaajal.

Mumbai: The Censor Board of Film Certification (CBFC) has provoked the ire of both - filmmakers and the audiences with their whimsical demands for cuts and beeps and now, they have rubbed noted filmmaker Prakash Jha the wrong way.

Mr Jha has been asked to beep out the word 's@al@' among other 'offensive words' from his upcoming movie Jai Gangaajal starring Priyanka Chopra, as it is there in CBFC Chairperson Pahlaj Nihalani's infamous list of cuss words.

The Revising Committee has asked Mr Jha to make 11 cuts in his cop-drama for a U/A certificate, which if applied across the film would add up to 50-odd cuts and will change the film's very texture.

An upset director, said, "How many beeps can you have in a film? s@al@ is a word we use in everyday conversation. My cop drama is set in the hinterlands. I'm not saying anything anti-national or anti-religion. I'm a responsible maker who would never hurt anyone's sentiments. There's a need to look at the context in which a particular word or phrase is used. If a villain is saying something and is immediately taken to task for it and not glorified, they should let it go."

"I was told that two members wanted to give it an A certificate with several cuts while two others were ready to give it a U/A with minimal cuts. The matter was referred to Pahlaj Nihalani who asked me to send it to the Revising Committee. He sat in the screening and headed the committee. While several members appreciated the film, I was offered a U/A with 11 cuts which wasn't acceptable. There is no rule saying certain cuss words cannot be used," he added. (Also Read: Amitabh Bachchan Inspired Priyanka's 'Angry Young Woman' Act)

Mr Jha also argued that his 2003 release Gangaajal too was full of violence and cuss words but it was passed with a U/A certificate and only one word was muted. At that time too BJP was in power with Ravi Shankar Prasad as the Information & Broadcasting Minister. "It has been telecast on TV over 300 times since and no one has objected to the language," he pointed out.

The Revising Committee has also objected to one remark about a woman in the movie. Mr Jha points out that his protagonist is a woman, a cop, who's in uniform in almost the entire film. "There's no overt sexuality or unnecessary violence. They wanted me to reduce an action scene by 50 per cent; I'm okay with that, but not okay with the language being diluted. I'm going to the Tribunal hoping they will see things in the right context. Else, I'll move court. One mind set has created all this absurdity," he groused, adding that his socially relevant drama has a message for youngsters and an A certificate would cut them out.

Close on the heels of the recent controversies, the Centre has decided to form a new committee, headed by veteran filmmaker Shyam Bengal, which will be responsible for the overhaul of the Censor Board and when Mr Jha was asked if that will change things, he said, "It's a relief to filmmakers but I personally have always been against any kind of censorship."

Written and directed by Prakash Jha, produced by Prakash Jha Productions and Play Entertainment and co-produced by Milind Dabke, Jai Gangaajal revisits the dusty heartland of Central India and examines the society-police relationship. The movie is all set to release on 4th March, 2016.

Jai Gangaajal is neither a prequel nor a sequel to Ajay Devgn's Gangaajal but is a fresh story.