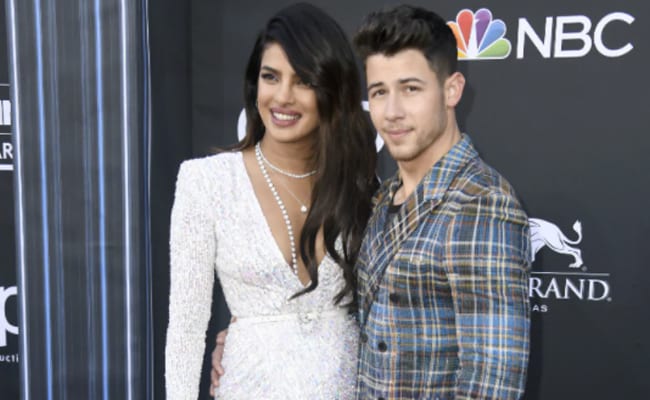 Priyanka Chopra and Nick Jonas at the Billboard Music Awards 2019.

Nominees for this year's Billboard Music Awards were announced on Tuesday and Jonas Brothers have scored nods in four categories. Needless to say, Priyanka Chopra, who is married to Nick Jonas, gave a big shout out to the band. Re-tweeting Jo-Bros' tweet about their nomination, Priyanka Chopra congratulated them like this: "Congrats, Jonas Brothers for your Billboard Music Awards nominations." Jonas Brothers have been nominated in the Top Artist, Top Duo/Group, Top Radio Songs Artist and Top Radio Song categories. They will compete in the Top Artist category with Billie Eilish, Post Malone, Taylor Swift and Khalid but more on that later.

Last year, the pop-band performed to their songs Sucker, Jealous and Cake By The Ocean at the Billboard Music Awards. Nick Jonas also trended big time after he kissed Priyanka during his performance at the awards.

The 2020 Billboard Music Awards will broadcast live from The Dolby Theatre in Los Angeles on October 14 with singer Kelly Clarkson as the host. The award show was initially slated to take place in April this year but it was postponed due to the coronavirus pandemic.

This year, rapper Post Malone, with maximum 16 nominations, will be competing with Jonas Brothers for the Top Artist award. Rapper Lil Nas X has scored 13 while singer Billie Eilish has earned 12 nominations. Khalid has scored 12 nods while Lizzo earned 11 nominations. See the list of nominations here.