"10 years ago we lost you and yet we feel your presence in everything we do..." Bhumi wrote 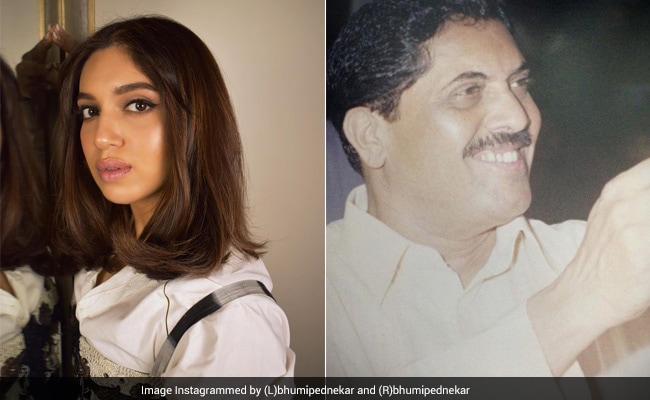 Actress Bhumi Pednekar lost her father Satish Motiram Pednekar ten years ago. On the occasion of his 10th death anniversary on Wednesday, Bhumi remembered her late father. She posted an old picture of her dad on Instagram. Bhumi also wrote an emotional note for him. While it has been a decade since she lost him, the actress still feels his "presence in everything" she does. She wrote, "Satish Motiram Pednekar...Forever Papa...10 years ago we lost you and yet we feel your presence in everything we do..."

Bhumi also mentioned her younger sister Samiksha Pednekar and their mom Sumitra Pednekar in the caption. Bhumi added, "I see you in samu and I hear you in everything that mom has to say. I see you when I talk, when I crack a joke or have my few moments of wisdom."

The actress called herself "daddy's girl" and concluded her post, "You've left a void that nothing can fill, yet we feel so lucky have had the years we had with you. A life full of memories and teachings that have made us who we are.... #PednekarGirls #SatishPednekar #daddysgirl."

Bhumi Pednekar was 21 years old when her father died. She is 31 now.

Bhumi shared the same picture on Instagram last year. The photo was featured in the series of her post that she shared on the occasion of his birthday. Bhumi had posted a set of throwback pictures of her memories with dad on Instagram. In the first photo, he can be seen standing next to Minnie Mouse. A few pictures feature little Bhumi with her dad. We also see a photo of Bhumi and her dad which was clicked years later when she was growing. Bhumi and Samiksha's mom Sumitra is also there in a few pictures.

Bhumi also wrote a lengthy note along with the photos. "Happy birthday Papa...I miss you every day, every minute, and every second...But then, I see you everywhere..."

"...Every cricket and football match that we watched...Every birthday of ours, where you made us feel like we were gods...Every failure of ours was celebrated and every success learned from. You taught us to love all and made us strong. Every time they say, you both are just like him. I miss you even more cause I wish you could have seen the 'You', that we have become. #SatishMotiramPednekar #HappyBirthdayPapa #MissYou," a part of her caption read.

Bhumi Pednekar's father died in March 2011. Bhumi's family celebrates his birth anniversary on May 19 every year.