Bhoot: Part One - The Haunted Ship Box Office Collection Day 5: At Rs 20 Crore, Vicky Kaushal's Film Is "Steady On The Lower Side"

Bhoot: Part One - The Haunted Ship Box Office Collection: The film has collected over Rs 20 crore 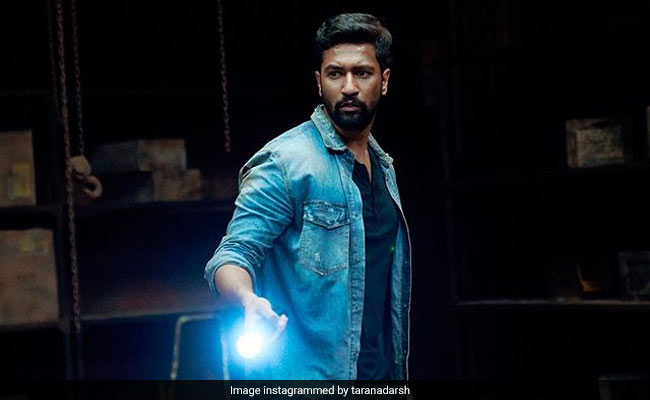 Vicky Kaushal's latest movie Bhoot: Part One - The Haunted Ship is facing a rough time at the ticket window with only selected metros contributing to its revenue, as reported by Bollywood trade analyst Taran Adarsh. The movie which marks Vicky's debut in the horror thriller genre, collected Rs 2.10 crore on Tuesday, taking the total collection of the film to Rs 20.78 crore. Sharing the box office performance of the film on Twitter, Taran Adarsh wrote, "Bhoot is steady on the lower side. Select metros contributing to its revenue. Eyes Rs 24 crore and total in week 1. Friday 5.10 crore, Saturday 5.52 crore, Sunday 5.74 crore, Monday 2.32 crore and Tuesday 2.10 crore. Total: Rs 20.78 crore India business."

The movie opened to negative reviews from film critics post its release on Friday. In his review for NDTV, film critic Saibal Chatterjee gave 1.5 stars (out of 5) to Bhoot: Part One and wrote: "You know a horror film is a horrific misfire when it resorts to every trick in the book to scare the living daylights out of you but fails to well and truly pin you down. There is no want of trying in Bhoot: Part One - The Haunted Ship, written and directed by Bhanu Pratap Singh. The film abounds in tame and cliched genre tics that eventually amount to little. Forget sending chills down the spine, it barely elicits gasps of shock. If you do scream, it is more in disgust and bafflement than in fear."

Bhoot: Part One - The Haunted Ship also stars Bhumi Pednekar and Ashutosh Rana in pivotal roles. The film is the first of its series directed by Bhanu Pratap Singh and produced by Karan Johar's Dharma Productions.