The film will be released on March 18 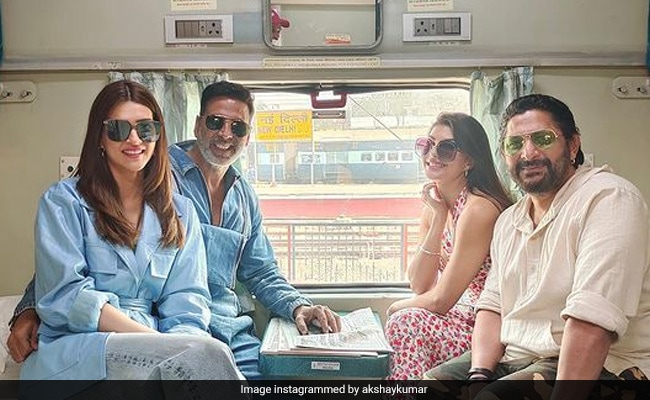 The Bachchhan Paandey team has been quite a sport. The star cast, including Akshay Kumar, Arshad Warsi, Jaqueline Fernandez and Kriti Sanon, has been making headlines with their eccentric ways of reaching out to fans. While we wait for the theatrical release of the thriller, Akshay Kumar has once again dropped a fun video on his social media page. The actor gave us a glimpse into his train journey. The video begins with Akshay Kumar, who is enjoying a nap time inside the train. He is then posed with a question, "Akshay ji, apki favourite actress kaun hai [Who is your favourite actress?]" To this, the actor replies, "Jacqueline Fernandez." A request follows, "Achcha. Spelling banana zara [Spell out her name, please]." Akshay Kumar, who finds himself unable to spell the actress' name, promptly changes his answer to Kriti Sanon. Leaving us in splits, Akshay Kumar spells Kriti's name and goes back to sleep. The caption read, "Kyun, maine galat kaha kya? Aap batao (Did I say something wrong? You tell me)."

Akshay Kumar isn't the only one who is sharing glimpses from his train journey. Arshad Warsi has also dropped a video from the trip. What we see is Arshad jumping and rolling and tripping on his train seat. Interesting, right? Throughout the video, the actor gushes about the journey and repeatedly says that he loves train journeys. The caption read the same, "I love train journeys." Actress Tabu commented, "What a fun." Look at the video:

In fact, the Bachchhan Paandey team has promoted one of their songs also during their train journey. The song Heer Ranjha was released recently. Akshay Kumar shot a video with co-star Jacqueline Fernandez on the train and wrote, "Heer Ranjha out now. Bachchhan Paandey out on March 18. Can't wait for you all to see."

Bachchhan Paandey is based on the story of a goon played by Akshay Kumar. The film will be released on March 18.