Bachchhan Paandey will release on March 18 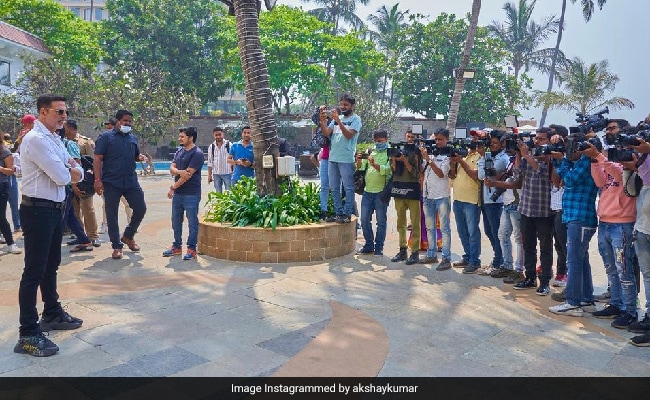 Bachchhan Paandey promotions are going on in full wing. From attending talk shows to Reels challenges, the star cast has been elevating the promotion game with each passing day. Amidst all this hustle and bustle, Akshay Kumar, who is playing the lead role in the movie, has dropped an appreciation post. Here, he is standing in front of media persons. Akshay Kumar's caption read, "This is an appreciation post for our media persons and all the hours they put in...Come rain, come shine, you guys are always there. Bachchhan Paandey promotions." The actor has surely melted our hearts with his gesture. Take a look at the post:

Earlier, the star cast was busy promoting the newly released song Saare Bolo Bewafa from the upcoming film. Akshay Kumar and Kriti Sanon together shared a video on Instagram where we see the two alongside Jacqueline Fernandez and Arshad Warsi. In the video, Jacqueline starts grooving to the number. When the camera swivels to the side, we see Arshad Warsi and Kriti Sanon. In the last frame, Akshay Kumar makes an appearance.

Akshay Kumar has also promoted the song Saare Bolo Bewafa on Kapil Sharma's talk show. The actor added a fun twist to his too. In the clip that he shared on Instagram, Akshay Kumar stands beside Kapil Sharma and throws the "Bewafa challenge" towards the fans.  The actor wrote in the caption, "Bewafa yani dhokebaaz. Sabki life mein hota hai. Abhi meri life mein hai Kapil Sharma. Aur aapki [Bewafa means unfaithful. We all have one such person in our lives. In my life, it is Kapil Sharma. Who is yours?] Make a Reels with Saare Bolo Bewafa. Zor se bolo bewafa [Say it out loud, Bewafa]." He also called the comedian "Kapil Bewafa" and left the audience in splits.