At Shahid Kapoor's Birthday Bash, Ananya Panday Was Ishaan Khatter's Plus One 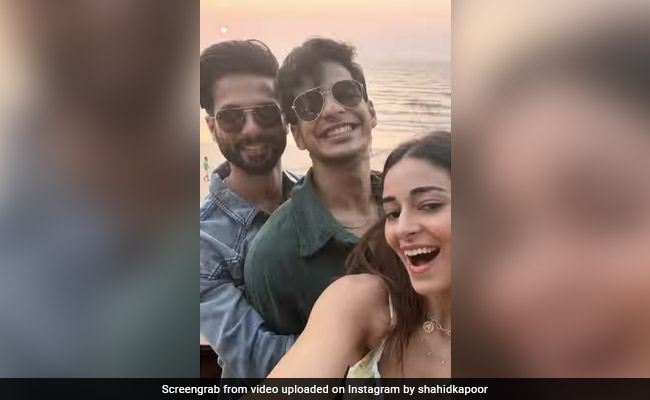 Shahid Kapoor's birthday bash last week surely seemed like a lot of fun. On Sunday, the actor shared a video of all the pictures from his 41st birthday bash. Needless to say, the video features Shahid's wife Mira Rajput and his brother Ishaan Khatter. Can you guess who was Ishaan's plus one for the party? Well, it was his Khaali Peeli co-star and rumoured girlfriend Ananya Panday. The actors have been reportedly dating for over a year and they frequently vacation together. Ishaan and Ananya ushered in 2022 together in Ranthambore. Besides Mira Ananya, Ishaan, the video also features photos of Shahid's Jersey co-star Mrunal Thakur and actor Kunal Kemmu. "Best times," Shahid Kapoor captioned the video.

On Shahid's birthday, Mira shared this post and she had captioned it: "Happy Birthday life. May you get the best of everything because you are the best. Best dad, best friend, best husband, best sage... I love you. #mineforever #birthdaybumps."

Shahid Kapoor is son of actors Pankaj Kapur and Neelima Azeem. Ishaan Khatter, son of Rajesh Khattar and Neelima Azeem, made his acting debut with Beyond The Clouds. Shahid married Mira Rajput in July in 2015. Their daughter Misha was born a year later in August. Shahid and Mira are also parents to a son named Zain, who they welcomed in the year 2018.

Shahid is the star of critically acclaimed as well as hit films like Udta Punjab, Haider, Jab We Met, "Padmaavat" and Ishq Vishk. His last film was the 2019 hit Kabir Singh, co-starring Kiara Advani. The actor will next be seen in Jersey, in which he plays the role of a cricketer.

Ishaan Khatter's upcoming project is Phone Bhoot, a horror comedy, in which he will co-star with Katrina Kaif and Siddhant Chaturvedi. He also featured in Dharma Productions' Dhadak in 2018 and Mira Nair's web-series A Suitable Boy, co-starring Tabu.