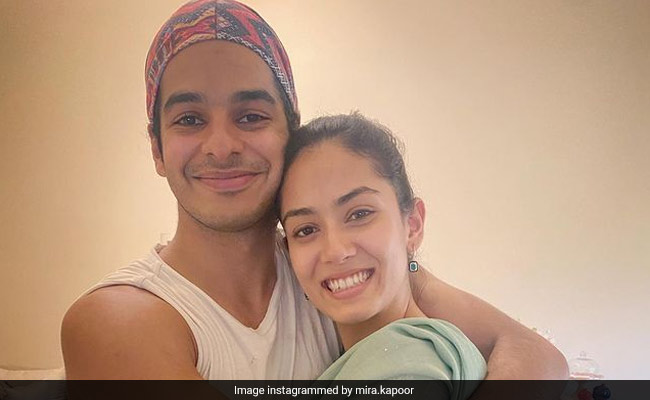 Happy birthday Ishaan Khatter. As the actor turns a year older today, we are joining thousands of fans and friends to wish Ishaan on the big day. We are also quite positive that our birthday wishes are not a patch on the special note penned by Mira Rajput, Ishaan Katter's sister-in-law. Mira, who is married to actor Shahid Kapoor, has always had a way with words. We saw the best possible display of this in the birthday note that she shared on Instagram. The note, which is filled with a whole lot of love and inside jokes, is attached to a lovely image of Ishaan Khatter.

In the caption, Mira Rajput wrote, “Spirited, talented, the one with the biggest hair and the biggest heart, ever so loving, perpetual third wheel and the best chachu (uncle) in the whole wide world…Happy birthday, Ishaan Khatter. Love you loads.”

The mother of two further added, “May we always click the best pictures of each other and always be 90s kids forever.” Giving us major FOMO, Mira Rajput hinted at an inside joke and said, “Let's keep the sidebar going when the conversations take a turn for you know... “evolved”. She concluded the note by saying, “Always be happy and keep the kids busy.”

Replying to the post, Ishaan Khatter said, “Hah. Amen. Your words are sweeter than cake. Love ya forever, gal.”

Ishaan Khatter shares a unique bond with his brother, Shahid Kapoor and sister-in-law Mira Rajput. The trio is often seen interacting on social media, indulging in banter and jokes. For instance, a few days ago, when the couple dropped an early morning selfie, Ishaan Khatter was the first to comment saying, “cayuties.”

Also, who can forget the time Ishaan Khatter secretly recorded Shahid Kapoor being schooled by their mother, actress Neelima Azeem and Mira Rajput for always being on the phone? Sharing the clip, Mira wrote, “Put down your phones. Also, Ishaan Khatter literally documenting our lives even while we sleep.”

Meanwhile, birthday boy Ishaan Khatter celebrated his special day by watching a movie in the theatre. Sharing pictures, Ishaan said, “Thank you all for the birthday love. Couldn't ask for a bigger gift than being back in the dreamscape again after 20 months - the cinemas. There's just nothing like it. Rooh ka daana paani [Food for the soul]. Let the spice flow.”