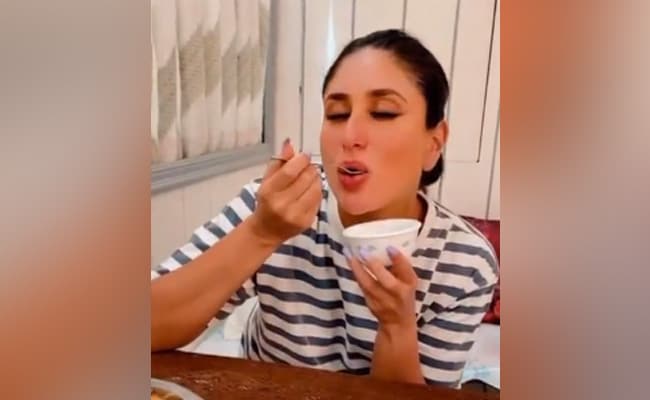 Kareena Kapoor is a big-time foodie and often shares several posts relishing delicious delicacies. However, now she has proved that she is a woman of her words. Recently, the actress shared a video on her Instagram handle, gorging on Moong dal ka halwa. Yes, you read that right, yesterday, Kareena Kapoor treated her Insta family with a video of her enjoying mouth-watering biryani with her team in the vanity van. In the same video, Bebo mentioned that she would bring moong dal ka halwa the next day.

As promised, Kareena Kapoor brought moong dal ka halwa and posted a video feasting on it. She captioned the video as, "As promised... halwa it is," along with three red hearts.

On Monday, she dropped the video of enjoying biryani with her team and captioned it as, "Monday biryani... Already planning tomorrow's dessert".

On the work front, Kareena Kapoor is all set to make her OTT debut with Sujoy Ghosh's next. The film also stars Jaideep Ahlawat and Vijay Varma. Speaking to Hindustan Times, she said, "The film is a screen adaptation of a work which was a global bestseller. It has so many aspects to it... murder, mystery, thrill and much more, which put in the hands of our inimitable director Ghosh is something I am eager to start work on."

Meanwhile, Kareena is awaiting the release of her much-delayed film Laal Singh Chaddha, co-starring Aamir Khan. The film is slated to release in theatres on August 11, 2022.