Kareena Kapoor To Make Her OTT Debut. "And So It Begins," She Writes

"This film will mark my return to acting," Kareena Kapoor 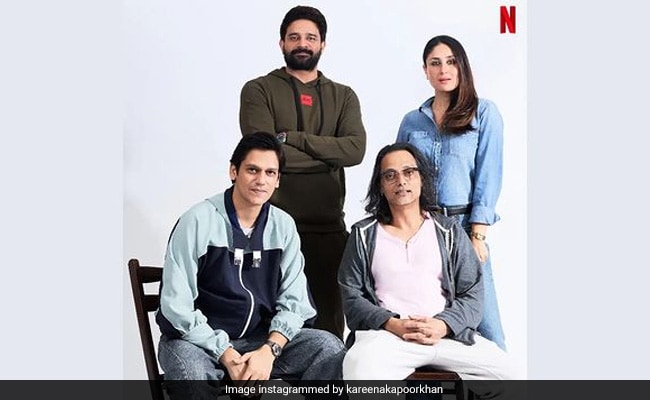 Kareena Kapoor has been away from the silver screen since the birth of her second baby Jehangir aka Jeh. However, we have a good news that will leave her fans excited, the actress will be soon making her OTT debut with Sujoy Ghosh's next film. The actress, on Monday, gave her fans a glimpse of her upcoming project, co-starring Jaideep Ahlawat and Vijay Varma in the lead. Sharing the post on her Instagram handle, she wrote, "And so it begins...12th Street Entertainment & Northern Lights Films in association with Boundscript and Kross Pictures present a Netflix Original directed by Sujoy Ghosh. Produced by Jay Shewakramani & Akshai Puri. Produced by Sujoy Ghosh & Thomas Kim."

Kareena Kapoor will be debuting with Netflix's screen adaptation of Japanese author Keigo Higashino's The Devotion of Suspect X.

Confirming the news to Hindustan Times, the actress said that this project will mark her return to the acting world after the birth of Jeh. The actress further stated that she is quite excited about the project as she will be working with a stellar cast and crew.

Spilling the beans about the project, Kareena Kapoor said, "The film is a screen adaptation of a work which was a global bestseller. It has so many aspects to it... murder, mystery, thrill and much more, which put in the hands of our inimitable director Ghosh is something I am eager to start work on."

Praising the director, she added, "I've seen his (Ghosh's) films and needless to say I love his work. I love that he has his own method and style and is so sure of what he wants to do... every actor appreciates a director with a vision. I connected with the script".

Kareena Kapoor is not the first of the Kapoor-Khan family to venture into the OTT world. Her husband-superstar Saif Ali Khan has worked on two projects streaming on OTT platforms- Sacred Games and Tandav. Also, Bebo's elder sister Karisma Kapoor made her comeback to the acting world with Mentalhood, streaming on ALTBalaji.

On the work front, Kareena will soon be seen in Laal Singh Chaddha, co-starring Aamir Khan. The film is slated to release in theatres on August 11.

Moving In With Malaika Teaser: Trolls, Beware, Malaika Arora Is Coming For You