Kareena Kapoor's Cheat Sheet For Beating "Monday Blues" Is This

"I have missed this Biryani," commented Karisma Kapoor 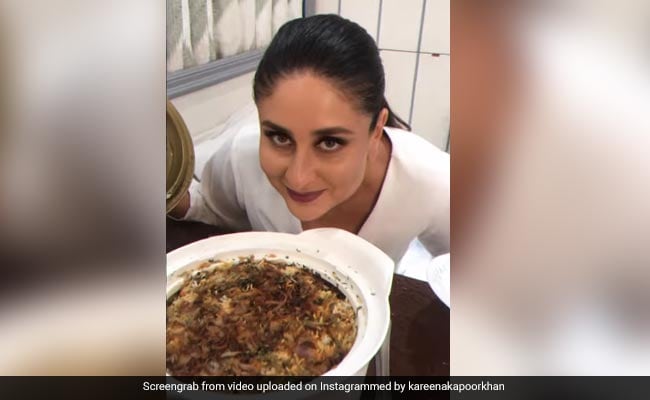 Kareena Kapoor in a still from the video. (courtesy kareenakapoorkhan)

Kareena Kapoor is a self-confessed foodie and a quick glance at her Instagram profile corroborates to it. The actress, on Monday evening, posted a video of herself eating some biryani. The video also features her team. Kareena's expressions in the video say it all. She captioned the video: "Monday blues biryani ... Already planning tomorrow's dessert." She added the hashtag #Reels, #ReelItFeelIt and #Biryani." In the comments section, Kareena's sister Karisma wrote: "I have missed this Biryani."

Biryani fan Kareena Kapoor once shared a picture of the "insane meal" that Prabhas sent, who co-stars with her husband Saif Ali Khan in the upcoming movie Adipurush. "When Baahubali sends you Biryani, it's gotta be the best," wrote Kareena. She also added a thank you note for Prabhas and said: "Thank you, Prabhas, for this insane meal."

Kareena Kapoor's additional skills include "demolishing one pizza after another." Here's proof.

Just in case Kareena Kapoor's love for food wasn't evident enough. Her "productive weekend" does include food and naps.

Kareena Kapoor was last seen in the 2020 film Angrezi Medium, co-starring late actor Irrfan Khan, and actress Radhika Madan. Kareena will next be seen in Aamir Khan's Laal Singh Chaddha, which is a remake of the 1994 film Forrest Gump. Kareena shot for parts of the film during her pregnancy.

Viral: Mahira Khan Dances To A Govinda Song At A Wedding