Arjun Rampal, who attended Justin Bieber's concert in Mumbai, with his daughters - Mahikaa and Myra, has dismissed the reports about leaving the event midway due to a set of 'unruly crowd' 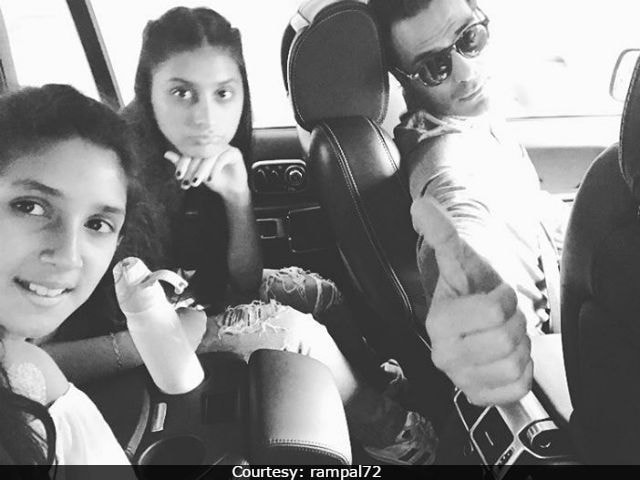 Arjun Rampal with Mahikaa and Myra on his way to the concert (Courtesy: rampal72)

New Delhi: Actor Arjun Rampal, who attended international pop icon Justin Bieber's concert in Mumbai on Wednesday evening, with his daughters - Mahikaa and Myra, has dismissed the reports about leaving the event midway. Reports suggest that Arjun was forced to leave the concert due to a set of 'unruly crowd' at D Y Patil Stadium, where Justin Bieber's concert was scheduled. In a series of tweets, the actor clarified that they watched the concert 'peacefully.' He writes, "My daughters and I watched the whole concert peacefully. Went home peacefully. To make up ur own stories is pathetic so please do clarify." Justin Bieber performed in Mumbai as part of his Purpose Tour. This was his maiden concert in India.

My daughters and I watched the whole concert peacefully. Went home peacefully. To make up ur own stories is pathetic so please do clarify.

Just read now,photographers at the Bieber concert were unruly with my daughters.Utter nonsense.They infact helped us get thru. #fakenews

Beliebers (as Justin Bieber fans call themselves), had queued up at the venue right in the morning. Celebrities like Alia Bhatt, Sridevi, Raveena Tandon, Sonali Bendre, Bipasha Basu and Karan Singh Grover, also attended the concert. However, most of them were miffed with the arrangements. While Bipasha and Karan reportedly left the venue due to VIP passes issue, Sonali Bendre called it a 'waste of time.'

Promoted
Listen to the latest songs, only on JioSaavn.com
Meanwhile, Beliebers were also furious to know that the pop icon's performance was lip-synced. Justin Bieber only sang four songs live and 18 of them were lip-synced. Filmmaker Anurag Basu, who watched the concert with his daughter, told news agency PTI, "I would have been happy if he would have sung all songs live. He only sang four songs live. An artist of his calibre should sing live. He was not prepared."

Shehnaaz Gill To Co-Star With Diljit Dosanjh In Honsla Rakh