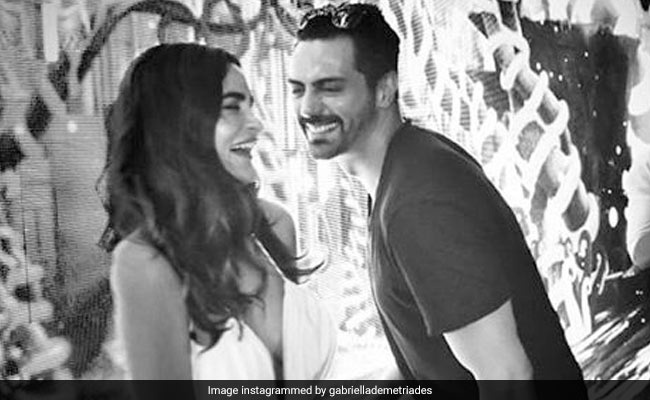 Arjun Rampal, who just hosted a baby shower for his girlfriend Gabriella Demetriades, opened up about the equation his teenaged daughters share with the mom-to-be in an interview with Mumbai Mirror. Arjun and Gabriella are expecting their first child together and he also has two daughters - Mahikaa, 17, and Myra, 14 - with his estranged wife Mehr Jesia. Speaking to Mumbai Mirror at the baby shower, the Rock On! actor said it was important for him that his daughters connected with Gabriella and here's how it happened: "I must add that it was of prime importance that my daughters should accept her as a part of the family. I am blessed that they have, no questions asked."

Blessed to have you all. Thank you to my girls @diva.dhawan @hannabannaboom @zoejaneblues @atiyarakyan @kom4186 for not cheesing out on me

A post shared by Gabriella Demetriades (@gabriellademetriades) on May 26, 2019 at 6:01am PDT

When asked about how he met Gabriella, Arjun Rampal's cheeky response was: "We met through common friends. So, what can I say? That she stalked me? Wishful thinking that, buddy! It's only been a year since we started dating and here we are. For keeps." In the interview, he also added: "How can anyone resist falling in love with her?"

When you wake up to this, you know you are blessed. #Maldives #anantaraveli #thelife

Arjun reportedly met Gabriella at an IPL party when the actor was still married to Mehr. They supposedly reconnected after Arjun and Mehr's separation. Arjun Rampal and supermodel Mehr Jesia announced their separation after 20 years of marriage in May last year. In a joint statement, they said: "We are a family, our love for each other is forever intact and we shall always be there for one another and most importantly, for our children Mahikaa and Myra."

Arjun and Gabriella began making public appearances together prominently from earlier this year when they were spotted cheering for Rohit Bal from the Lakme Fashion Week front row. The couple made Gabriella's pregnancy announcement in April.

Gabriella Demetriades is a South African model and actress, who has featured in Indian films such as Sonali Cable (Hindi) and Oopiri (Telugu). Arjun Rampal was last seen in Paltan and starred in the web-series The Final Call.