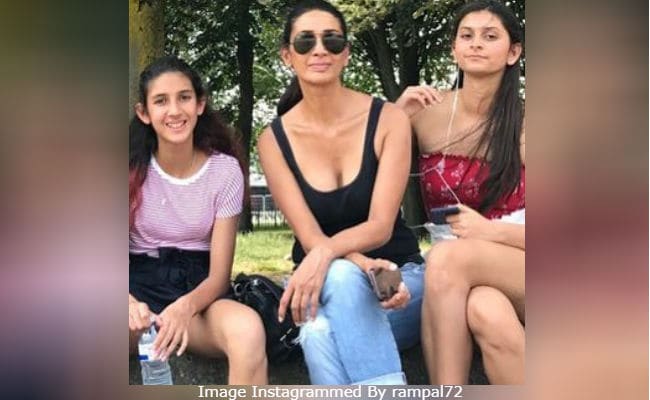 Actor Arjun Rampal appears to have flown to Paris with ex-wife Mehr Jesia and their daughters Mahikaa and Myra for a vacation. Arjun has shared some pictures from their Parisian holiday, featuring Mehr, Mahikaa and Mrya. The recent post is also of the trio and the caption reads, "Parisian ladies." He also added a heart emoticon and used hashtags like 'vacation' and 'beautiful girls.' Arjun's holiday album is filled up with pictures of his daughters but the actor doesn't feature in any of them. "My babies in Paris at the Sacre-Coeur. So beautiful they are, na?" read a caption of another picture of Mahika and Myra.

My jaan. This girl fills up my soul with love #soulmates. #paris #mahikaa

My babies in Paris at the SacreCour. So beautiful they are na? #beautifulgirls

Promoted
Listen to the latest songs, only on JioSaavn.com
Arjun Rampal, 45, and Mehr Jesia, 47, announced their separation in May this year. Both were former models and were married for 20 years. "After a 20-year-long beautiful journey filled with love and beautiful memories, we would like to share, that all journeys have different paths. We feel that it is time for us to move on to different destinations henceforth. We have always been solid when it has come to us, we will continue to be solid for each other and our loved ones, as we embark upon a new journey," read an excerpt from a joint statement released by the ex-couple, who also added that they will 'always be there for each other' and children Mahikaa and Myra.

Arjun Rampal is best-known for films like Om Shanti Om, Rock On!!, Raajneeti, Ra.One and Heroine. His upcoming film is Paltan.