ICYMI, Gabriella Demetriades' baby shower was held over the weekend and she recently shared pictures on social media 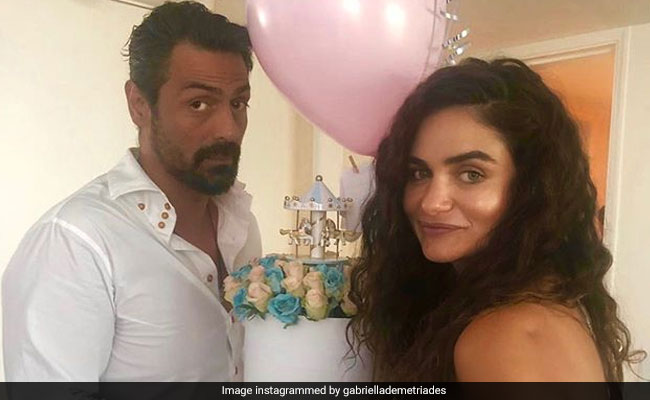 A very private baby shower was hosted for parents-to-be Arjun Rampal and Gabriella Demetriades by their friends over the weekend and stunning pictures from the ceremony were shared by Gabriella on her Instagram page. She thanked her girl-friends for not "cheesing out on her" and wrote: "Blessed to have you all. Thank you to my girls Diva Dhawan, Hanna Stromgren Khan, Zoe Blues, Atiya Rakyan and Komal Rampal for not cheesing out on me." In the pictures, Gaberiella and Arjun twin in white as they pose with a sumptuous looking carousel cake decorated with fondant flowers. In other pictures, Gabriella, who wore a white satin dress, posed with her besties and also with the party group.

Blessed to have you all. Thank you to my girls @diva.dhawan @hannabannaboom @zoejaneblues @atiyarakyan @kom4186 for not cheesing out on me

A post shared by Gabriella Demetriades (@gabriellademetriades) on May 26, 2019 at 6:01am PDT

Arjun Rampal announced girlfriend Gabriella Demetriades' pregnancy in April with an adorable post. The actor is separated from his wife Mehr Jesia and their divorce proceedings are underway. Arjun Rampal and Mehr Jesia have two daughters together, whom they've named Mahikaa and Myra.

Arjun Rampal and Gabriella Demetriades reportedly first met in 2009 during an Indian Premier League after-party, which was much before he separated with his wife Mehr Jesia. They apparently reconnected later.

Gabriella Demetriades is a South African model and she has featured in Bollywood film Sonali Cable. However, Gabriella told news agency IANS that she doesn't wish to pursuit a career in Bollywood but added that she's open to any project for an "English speaking role." Gabriella also own fashion label Deme and she hosted TV show Twinning, which aired on AXN.