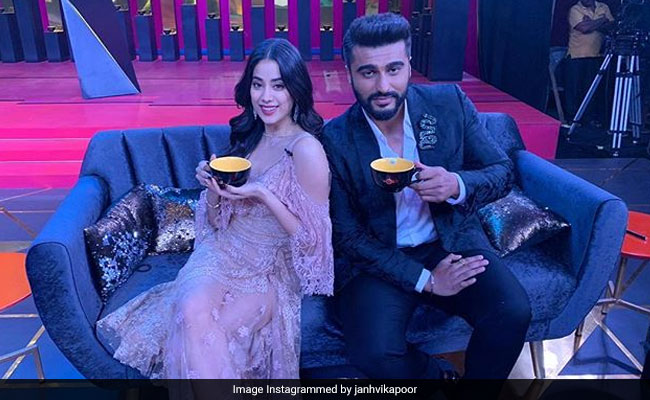 Arjun Kapoor and Janhvi on the sets of Koffee With Karan 6. (Image courtesy: Instagram)

Arjun Kapoor, son of filmmaker Boney Kapoor and Mona Shourie, told Mumbai Mirror that though "worst circumstances" brought him closer to his sisters Janhvi and Khushi, daughters of Boney Kapoor and Sridevi, but they're trying to make the best of it. He also added that he doesn't want to talk about his equation with Janhvi and Khushi to ward off bad vibes. "I am still discovering them, and I don't like to speak too much about it as mujhe lagta hai ke nazar na lage. We were brought together by the worst of circumstances but we're trying to make the best of it. There is a long way to go before I can truly say that I know them inside out. We have a WhatsApp group that keeps us connected all the time," Arjun Kapoor told Mumbai Mirror.

Arjun Kapoor and his sister Anshula supported Janhvi and Khushi through and through after Sridevi's death in February last year. Anshula went on holidays with Janhvi and Khushi and frequently posted pictures of them on social media. In addition, Arjun Kapoor and Janhvi frequently share comments on each other's Instagram posts. Janhvi, who made her Bollywood debut with Dhadak last year, also got her family's complete and unflinching support. Janhvi and Arjun also co-starred in an episode of Koffee With Karan 6.

Apart from not discussing his equation with Janhvi and Khushi, Arjun Kapoor also doesn't want to comment on reports of his impending rumoured wedding to Malaika Arora. "I am not getting married. I have not hidden anything from anyone and I think my personal life deserves respect and dignity for that. I am happy and that is all that matters. My personal and professional lives help me sleep well at night and I would like it to remain like that," Arjun told Mumbai Mirror.

Arjun Kapoor will be next seen in India's Most Wanted releasing on May 24.