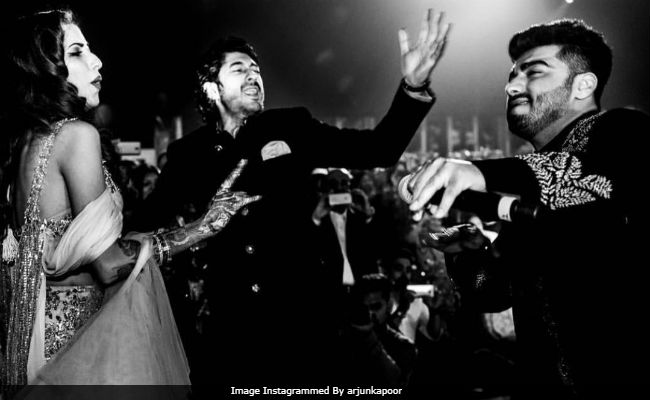 New Delhi: After Sonam Kapoor, Arjun Kapoor also posted a message for newlywed cousin Mohit Marwah and his wife Antara Motiwala. Arjun has shared a black and white picture with Mohit and sister-in-law Antara, which is from their wedding festivities. The caption is just winning the Internet. "Welcome to the family @antara_m. First you were my friend then stylist & now you are officially part of La Familia. @mohitmarwah will make sure u stay smiling just like in this picture and you can always rely on me to make sure he makes sure," he wrote. (Arjun, that's so sweet). "Caption is the cutest" and "That should be enough to make any girl smile. You are such a gentleman," are some of the several comments posted on the trio's picture.

Here's the picture which Arjun shared with Mohit and Antara.

Welcome to the family @antara_m !!! First u were my friend then stylist & now u are officially Part of La Familia !!! @mohitmarwah will make sure u stay smiling just like In this picture & u can always rely on me to make sure he Makes sure !!!

Mohit Marwah and Antara Motiwala got married at a resort in UAE's Ras Al Khaima earlier this week. He is an actor while she's a celebrity fashion stylist. The wedding festivities were attended by most of the members of the Kapoor family like Sridevi, Boney Kapoor, Khushi, Arjun, Anshula, Anil Kapoor, Sonam, Rhea, Harshvardhan, Sanjay Kapoor, Maheep, Shanaya and others. (Jahnvi wasn't there).

Take a look at the dreamy pictures here.

With the most gorgeous couple!!! Bless them with years of happiness and love!!! #antumoh

Promoted
Listen to the latest songs, only on JioSaavn.com
On Thursday, Sonam also shared a heartfelt note for Mohit and Antara.

When your brother gets married to your oldest friend! Antu you were always family and now it's legal! I love you guys! Bhaiya you are the kindest and sweetest person in our big Punjabi family and you deserve all the happiness the universe can provide! Have the best life #antumoh and I'm so excited for this new journey to begin for both of you!