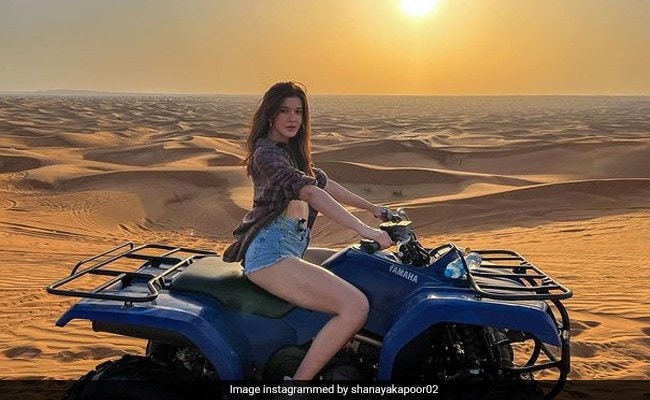 Shanaya Kapoor's Dubai dairies are getting interesting with each passing day. So what is she up to now? It's desert safari time for Shanaya. She has shared pictures from her latest adventure on Instagram. And, we are loving them. The opening side features Shanaya sitting on a sand bike. And, oh boy. She is looking stunning. Hey, don't miss the beautiful sunset view. Shanaya didn't waste much time thinking about the caption and wrote "Wanderlust and desert dust." What a caption, did we hear? Well, Antara Motiwala Marwah shares a similar sentiment. She wrote, “caption” along with okay and bomb emojis.

Shanaya Kapoor sent our hearts racing when she slipped into a green pencil dress. This time, she has just used a green heart for the caption.

Well, we must tell you that Shanaya Kapoor isn't alone in the Gulf nation. She has her biggest cheerleader by her side. Yes, it's Maheep Kapoor. Take a look at the photo dump shared by her.

Shanaya Kapoor is all set to make her Bollywood debut with Dharma Production's Bedhadak. The film is directed by Shashank Khaitan. Gurfateh Singh Pirzada and Lakshya are also part of the film.  Shanaya Kapoor has previously worked as an assistant director in Gunjan Saxena: The Kargil Girl. The movie featured her cousin Janhvi Kapoor in the titular role. Angad Bedi and Pankaj Tripathi were also part of the project.