If Anyone Can "Out Sprint" Problems It's Anil Kapoor

"They say you can't out run your problems," wrote Anil Kapoor 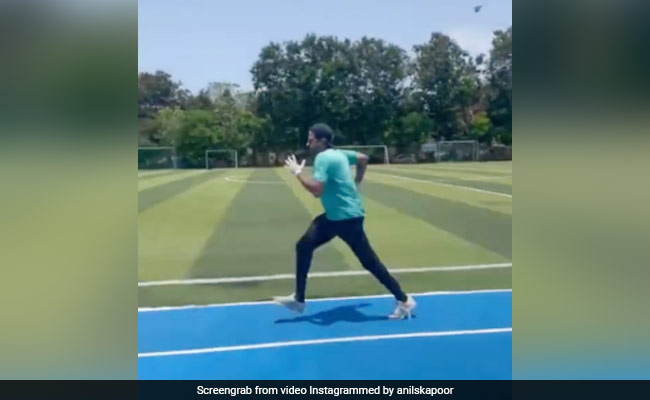 Anil Kapoor in a still from the video. (courtesy anilskapoor)

Actor Anil Kapoor seems to have found the recipe to the elixir of youth. The 64-year-old is known not just for his stellar acting skills but also for his young looks and enviable fitness levels. And now, he has succeeded in sending the Internet into a tizzy with a new video of himself. In the clip shared on Instagram, the actor is seen training on the running track. Anil is wearing a T-shirt, sweatpants, running shoes as well as a cap. Sharing the video, Anil wrote, “They say you can't outrun your problems but I will try my best to always out sprint mine.”

Fans of the actor were extremely impressed with the video and filled the comments section with positive responses and emojis. Reacting to the post, television actor Kushal Tandon wrote, “Super.” Similarly, actor Anupam Kher, who has shared screen space with Anil in several films, wrote, “Bravo!!”

One fan said, “Sir, always an inspiration.” Nodding at  Anil's forever young avatar, another fan wrote, “Anil Kapoor is not 65, he is 35 I think.” “The OG inspiration”, said another. Calling the actor an "evergreen star”, another fan said, “I want this type of energy when I'm as young as you.”

Recently, the actor also took time to show off his toned arms and biceps in a photo. Sharing the image, he wrote, “Lockdown is compulsory. What you do with it is optional.”

Actress Neena Gupta left a comment on the post that read, “You're an inspiration.” Reacting to the photo, actress Shilpa Shetty said, “Wah Anil Kapoor #inspiration.” Well, we cannot help but agree.

Anil, in a post, said that training is almost a meditative process for him. He explained, “What I love about training is that it anchors me to something that is consistent and meditative. Life throws so many curve balls at us that it's nice to have something that grounds us, something to keep coming back to. Just make sure that when you get back to training, you do it mindfully and gradually. Build slowly and allow yourself the chance to adjust and grow back into it. One step at a time goes a long way!”

In another post, he shared that being a Punjabi, food has always been his “weak point”.

“During the lockdown, I have set myself the task of achieving a new sharper look. This new look needs a new approach to eating. Both Harsh and my trainer Marc have taken it upon themselves to remind me constantly and lay down eating plans. I try and I battle. Sometimes I even fall. And what I've learnt through it all is that a chain is only as strong as its weakest link. So everyone in the house had to get involved. From those who kindly cook my food to the support of my family gathered around me at mealtime. Fitness is never a one-man/ woman crusade, it's about support and encouragement when we need it the most,” he wrote. Read the complete note here:

Anil Kapoor was last seen in the Netflix original AK vs AK. His upcoming projects include Bhool Bhulaiyaa 2, and Jug Jugg Jeeyo, among others.

"Gaining Those Kilos": How Kriti Sanon Prepped For Her Role In Mimi