Addressing a comment to his sister-in-law Rhea Kapoor, Anand shared a cute little conversation between Mr and Mrs Ahuja 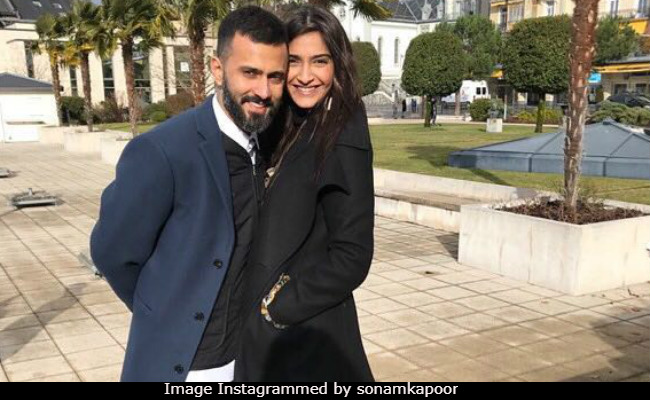 New Delhi: Just a few hours after Anand Ahuja explained the meaning of "#EverydayPhenomenal" - their wedding hashtag - there arrived a loved-up post on Sonam Kapoor's Instagram. Sonam made the best use of the Flashback Friday and shared a throwback photo featuring herself and Anand but that's not what the highlight is. In the comments section, Anand sort of makes a revelation about how competitive Sonam is when it comes to Instagram posts. Addressing a comment to his sister-in-law Rhea Kapoor, Anand shared a cute little conversation between Mr and Mrs Ahuja. Here's how it goes: "Sonam to me: 'How come you get to post and I don't get to post!? I also want to post!'... 2 min later... 'Anand, see your Instagram!'". He followed it up with face-palm and ROFL emojis. Anand was replying to Rhea's comment: "Best in the world."

Meanwhile, this is what Mrs Kapoor-Ahuja had captioned her photo: "My dapper handsome husband for all our lifetimes." Sonam's Instagram post is crazy viral now with over 2,36,100 'likes' in less than an hour! Sonam has 12.9 million Instagram followers while Delhi-based businessman Anand has over 3 lakh followers.

My dapper handsome husband for all our lifetimes #everdayphenomenal #flashbackfriday 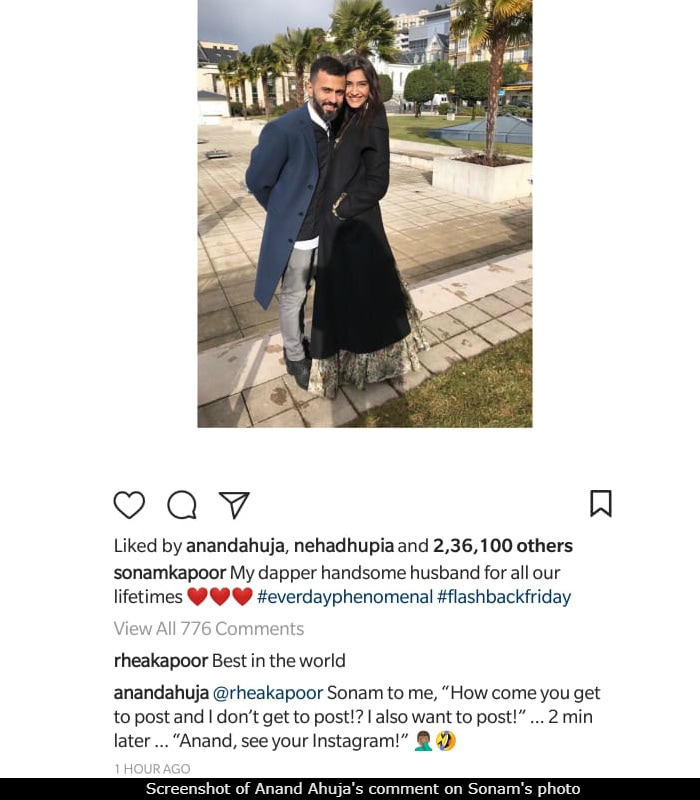 This is what Anand Ahuja had posted earlier in the day:

The meaning & notion behind #everydayphenomenal is best described by this poem, one of my favorites, below: "Who has not found the heaven below Will fail of it above. God's residence is next to mine His furniture is love." #EmilyDickinson #MahatmaGandhi taught us that our words become our actions which in turn become our habits, our values and ultimately our destiny. #EverydayPhenomenal reminds @sonamkapoor of the importance of appreciation, positivity, and gratitude...that happiness is not something you get, it's something you are. #EverydayPhenomenal #fbf @faraz_khalid @noon

Sonam Kapoor is perhaps making up for lost times and we are loving every bit of it. Ahead of the big fat Kapoor-Ahuja wedding and the announcement, photos of the couple only featured on Anand's Instagram with only work-related or promotional posts appeared on Sonam's feed.

Promoted
Listen to the latest songs, only on JioSaavn.com
Sonam Kapoor and Anand Ahuja wrapped their wedding festivities with a blockbuster reception ceremony in Mumbai, which witnessed the who's who of Bollywood dropping by. The couple have remained busy with their respective work commitments since then. After Cannes, Sonam is now preoccupied with the promotions of Veere Di Wedding while Delhi-based entrepreneur Anand is shuttling between Mumbai and Delhi to supervise work on the upcoming stores for Bhane, the brand of clothing he owns.