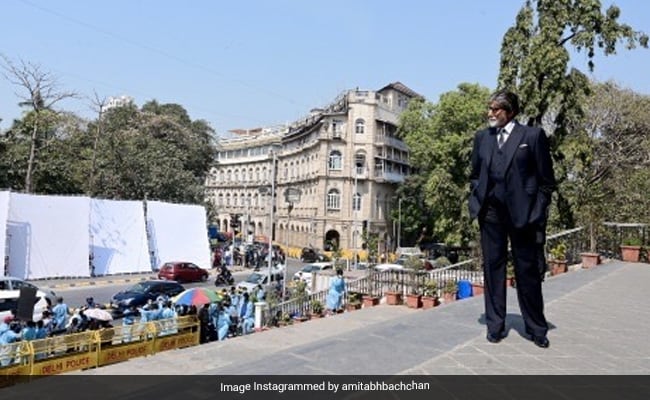 Amitabh Bachchan, who is currently shooting for his film Mayday with Ajay Devgn in Mumbai, shared a trivia about the location that he is filming at. On Monday afternoon, the actor shared a series of pictures from the film's location and he revealed that he had earlier shot for a sequence from his film Deewaar at the same location (the building in the backdrop of his picture). A nostalgic Big B wrote in his caption: "Looking back on time... See that arch in the stone building at the back... In a shadow loop. Police officer Shashi Kapoor shoots his brother Vijay in Deewaar at that spot in film. Today shooting same place for Mayday... Deewaar made in 1975 to today 2021. Been a while."

Big B later shared a picture collage, which featured the aforementioned scene from Deewaar and a recent click from the sets of Mayday and he wrote:"Deewar 1975 .. Mayday 2021...Looking back in time...The same corridor, the same location...So many film shoots here of several films of mine but today this came up."

Mayday, also starring Ajay Devgn and Rakul Preet Singh, is being directed by the former. The film is another addition to the list of Amitabh Bachchan and Ajay Devgn's collaborative projects like Khakee (2004), Satyagraha (2013), Major Saab (1998), Aag (2007), Hindustan Ki Kasam (1999) and Teen Patti(2010). Big B shared some more pictures from the sets of the film this afternoon.

The actor's upcoming projects include Ayan Mukerji's Brahmastra, co-starring Alia Bhatt and Ranbir Kapoor, and Chehre, alongside Emraan Hashmi. He will also be seen in the sports drama Jhund.