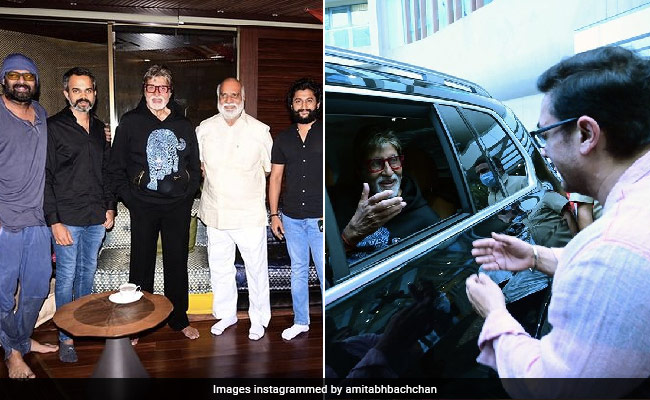 Big B met all these stars. (courtesy: amitabhbachchan)

If Amitabh Bachchan's latest Instagram entry is not the example of a star-studded picture, we don't know what is. The veteran actor shared a picture with superstars Prabhas, Dulquer Salmaan, Nani and filmmakers Prashanth Neel, and Nag Ashwin. Phew! Wait, it gets better. A few hours later, another star knocked at his car window. It was none other than Big B's Thugs Of Hindostan co-star Aamir Khan. About the first picture, this is what Big B wrote in his caption: "An evening with the stalwarts of cinema ... Prabhas - Baahubali; Prashant - director KGF2; a certain AB ; Raghavendra Rao - producer director. Legendary ; Nani - star, film TV ; Dulquer- star Malayalam Tamil Hindi ; Nagi Ashwin, director Project K currently .. and the joy of discussing film cinema and work."

The second post was a picture of Aamir Khan knocking on Big B's car window. "And as I am about to leave .. a knock on my car window and it's Aamir .. gosh ! So many legendary friends in one evening," wrote Big B.

Here's the second picture shared by Big B:

Amitabh Bachchan's upcoming projects include Ayan Mukerji's Brahmastra, co-starring Alia Bhatt and Ranbir Kapoor and the remake of the Hollywood film The Intern, along with Deepika Padukone. Earlier, late actor Rishi Kapoor was to star in the film. He was last seen in Nagraj Manjule's Jhund, which opened to stellar reviews. He will soon host the 14th season of the TV quiz show Kaun Banega Crorepati.