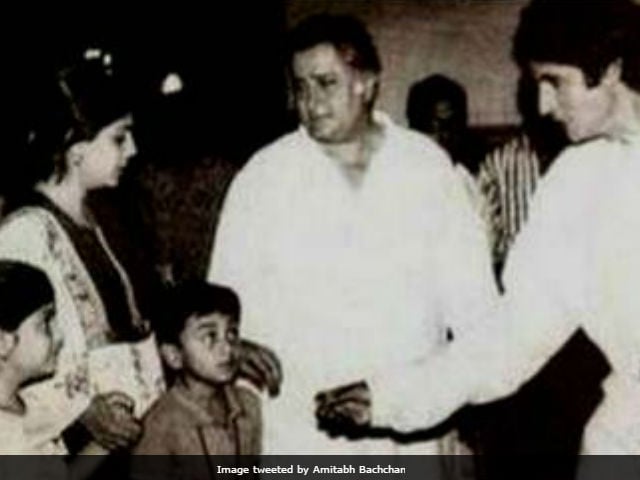 New Delhi: It must be the week of throwbacks. After an old picture of him and Vinod Khanna on the cricket field went viral, actor Amitabh Bachchan tweeted a photograph of a "wide eyed little fellow" who is now the 'superstar of the day'. Can you guess who? In a tweet, the 74-year-old actor posted an old picture of himself with Ranbir Kapoor, accompanied by his sister Riddhima Kapoor Sahani and mother Neetu Kapoor, as veteran actor Shashi Kapoor looked on. Big B captioned the image: "And that wide eyed little fellow is the Superstar of the day today ! Ranbir Kapoor! What an actor!(sic)."

T 2491 - And that wide eyed little fellow is the Superstar of the day today ! Ranbir Kapoor .. !! what an actor !! pic.twitter.com/sQFOpz1ooJ

The Bachchans and Kapoors' friendship goes back a long way. Big B has shared screen space with Rishi Kapoor in films like Amar Akbar Anthony, Coolie, Naseeb and Ajooba. And now, the actor will reportedly work with the "wide-eyed little fellow", Ranbir Kapoor, in Ayan Mukerji's film Dragon. The film also stars Alia Bhatt. A source told news agency PTI, "He has given his nod for the film. It's a full-fledged role and not a guest appearance. It's an important role. He will begin shoot this year itself."

Promoted
Listen to the latest songs, only on JioSaavn.com
Meanwhile, here's the tweet of Big B with Vinod Khanna, setting out for a charity cricket match that had gone viral

Amitabh Bachchan was last seen in Pink which won a National Award for the Best Film on Social Issues. The film, directed by Aniruddha Roy Chowdhury and produced by Shoojit Sircar, also stars Tapsee Pannu, Kirti Kulhari and Piyush Mishra. The actor will now be a part of Thugs of Hindostan , along with Aamir Khan and Jackie Shroff, Aankhen 2 and Sarkar 3 .