It is a BTS image from the sets of Darlings as Vijay Varma can be seen dressed up like Hamza, a railway employee 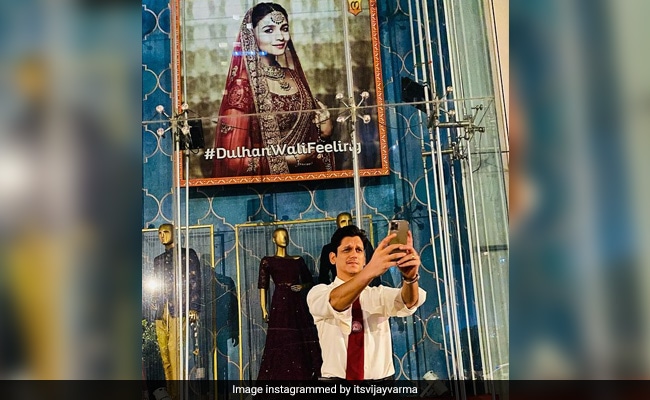 Alia Bhatt, Vijay Varma, Shefali Shah and Roshan Mathew's Darlings is becoming the viewer's favourite across borders. Jasmeet K Reen's directorial debut, which was released on Netflix on August 5, has occupied a spot on the list of Top 10 Trending Movies on the streaming platform not only in India but also in UAE, Singapore, Malaysia, Maldives, Mauritius, Qatar, Kuwait, Bahrain, Pakistan, Sri Lanka, Saudi Arabia and many more countries. It is the most watched film in three days on Netflix. Sharing the success of the film with his fans on social media on Friday, Vijay Varma, whose performance as Badru's abusive husband Hamza in the film has been garnering him a whole lot of praise, gave us a glimpse of “Darlings multiverse” and posted a photo with Alia Bhatt. No, not with Badru (played by the actress in the film) but only with Alia in an alternate universe.

It is a BTS image from the sets of Darlings as Vijay Varma can be seen dressed up like Hamza, a railway employee who met his end at the hands of his destiny just before the film concluded. Vijay aka Hamza is posing against a commercial featuring Alia Bhatt as a bride. “Darlings Multiverse. Safe to say Alia Bhatt is literally everywhere and now Darlings is the most watched film in the first 3 days. Trending in several countries! Loving it,” he wrote in the caption.

Vijay Varma shared another BTS picture with Alia Bhatt on his Instagram profile and this time, it also featured Roshan Mathew, who played the role of Zulfi in the film - an aspiring screenplay writer who loves Badru's mother Shamsunnisa (Shefali Shah) and joins the mother-daughter duo when they decide to punish Hamza.   The photo appears to be a BTS from the sequence where Hamza gets to know who had filed an F.I.R against him. On his way to his home from a police station, Hamza confronts Zulfi and learns that Badru knew who had filed a domestic violence complaint against him, contrary to what she had revealed to him earlier.

Darlings, which is the maiden film of Alia Bhatt as a producer, has been receiving love and appreciation from the audience and critics alike. In case you haven't seen the movie yet, check out Darlings trailer here: