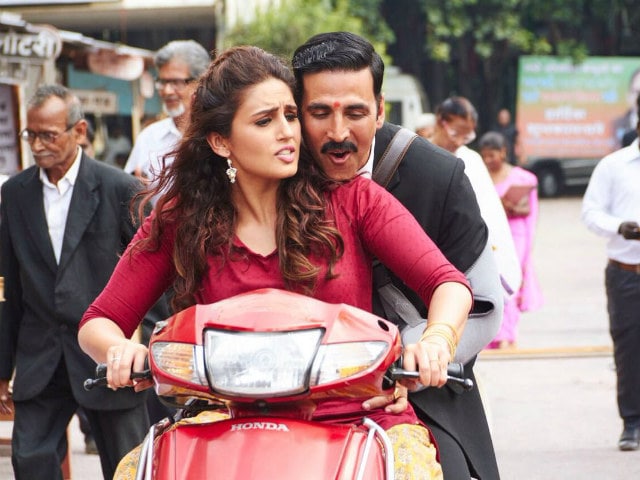 Jolly LLB 2: Akshay Kumar, Huma Qureshi in a still from the film

New Delhi: Akshay Kumar is all set with his courtroom drama Jolly LLB 2, which stars Huma Qureshi in the role of his wife Pushpa Pandey. The 49-year-old actor features as the protagonist, a lawyer named Jagdish Mishra in Subhash Kapoor-directed Jolly LLB 2. On Thursday, a day ahead of the film's release, Akshay engaged in a live chat on Twitter and said a thing or two about the film. For example, he opened up about Huma Qureshi's character and the rapport shared between Pushpa and Jagdish. Akshay was asked to say something about the character of Huma, and he replied: "Pushpa treats Jolly, how a man should be treated..." Read on to see his full tweet. PS: Akshay also added a smiley after his reply, just in case Pushpa chances upon his tweet and his words appear a little rude.

This is what Akshay tweeted:

Pushpa treats Jolly, how a man should be treated...on a tight leash :) https://t.co/KQIxYVl8Q6

In an interview with news agency IANS, Huma, who will share screen space with Akshay for the first time, said: "Pushpa Pandey is a girl from a middle class family who is fun, mad, has her own quirks and she keeps fighting with her husband Jolly."

Of her Jolly LLB 2 co-star Akshay, Huma told IANS: "It was great to work with Akshay as he is very disciplined and involved with the process of filmmaking. He does not go to his vanity when his scene is done, rather he interacts with all of us. In fact, I think we managed to finish shooting on schedule because of his discipline and dedication on the set."

Akshay wrapped his promotional duties for Jolly LLB 2 ahead of the live chat session. On Twitter he wrote: "Wrapped up last set of interviews and heading to answer your questions!"

Running a bit late,wrapped up last set of interviews and heading to answer your questions! Are you ready for #AskJolly? Chat you in 10 mins pic.twitter.com/EJpZdA7a3Q

Promoted
Listen to the latest songs, only on JioSaavn.com
The Khiladi actor also caught up with actor Arshad Warsi, who starred in the first film in the series - Jolly LLB. "And a mix it was - Jolly 1 with Jolly 2. Thank u so much Arshad Warsi for all your support for Jolly LLB 2," he tweeted.

And a mix it was - Jolly 1 with Jolly 2 Thank u so much @ArshadWarsi for all your support for #JollyLLB2.So glad u made it to the screening pic.twitter.com/3IxKqrQRHB