Fan clubs have curated a photo of Akshay Kumar, in which he sports a bald and moustachioed look and is dressed like a ruler from the pages of history 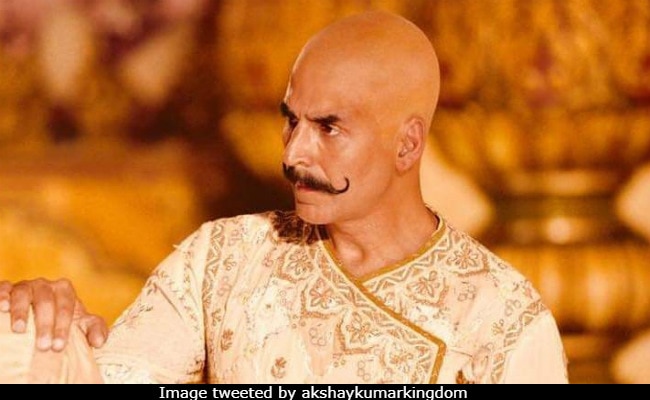 Akshay Kumar's new film Housefull 4 has been trending for a while now with one of the reasons being Mr Kumar's cancelling of the film's shoot last week over sexual harassment allegations against cast member Nana Patekar and former director Sajid Khan. Team Housefull 4 has witnessed a lot happen recently with Mr Khan and Mr Patekar resigning and the appointment of a new director but on Tuesday, the movie started trending for a photo of Akshay Kumar, which will indeed make you wonder if you missed an announcement about him starring in a period piece. Looks like you didn't. Fan clubs have curated a photo of the 51-year-old actor, in which he sports a bald and moustachioed look and is dressed like a ruler from the pages of history and has floored the Internet. Akshay's bald look is reportedly for one of his looks for Housefull 4. "Second look of Akshay Kumar from Housefull 4 is out," claims the Instagram post by a fan.

In the comments section, Instafam can't stop talking about how eye-catching is Akshay Kumar's new photo. "Ek daam jhakaas," read a comment while another jokingly added: "Housefull 4 hai ya Bajirao Mastani spoof." On Twitter, fans are over-joyed with the actor's new avatar. Akshay Kumar's look makes us go crazy," wrote a fan while another added: "Akshay Kumar first time in pure bald look in any movie. Get ready for explosion!"

@akshaykumar sir's stunning look from #Housefull4
Are you excited?? #AkshayKumarpic.twitter.com/eF9Snma6XL

Akshay Kumar's Housefull 4 has featured in headlines in the past weeks after allegations of sexual misconduct poured in against Sajid Khan. Mr Khan has been named and shamed by three women, following which he resigned as the director last week. Mr Khan's resignation arrived within hours of Akshay Kumar's tweet, in which he said he cancelled the film's shoot till further investigation against the alleged abusers. Farhad Samji has now been roped in to helm the movie. However, Team Housefull 4 were shooting in Jaisalmer when Tanushree Dutta revived the decade old controversy, alleging Nana Patekar of sexually harassing her on the sets of a film in 2008. Mr Patekar has also quit Housefull 4 citing 'convenience of everybody.'

While Akshay Kumar has taken a stand by choosing to not work with the alleged harassers, he has been 'seconded' by his Housefull 4 co-star Riteish Deshmukh. Kriti Sanon, who also stars in the film, was recently criticised for appearing to suggest that anonymous allegations of misconduct not be treated or reported as genuine.

The cast of Housefull 4 also includes names such as Bobby Deol, Kriti Kharbanda and Pooja Hegde. Akshay Kumar also has films such as Kesari, Good News and Rajinikanth's 2.0 in the pipeline.