After Sajid Khan Steps Down Over #MeToo Allegations, Housefull 4 To Be Directed By Farhad Samji

Sajid Khan resigned as the director of Housefull 4 on Friday 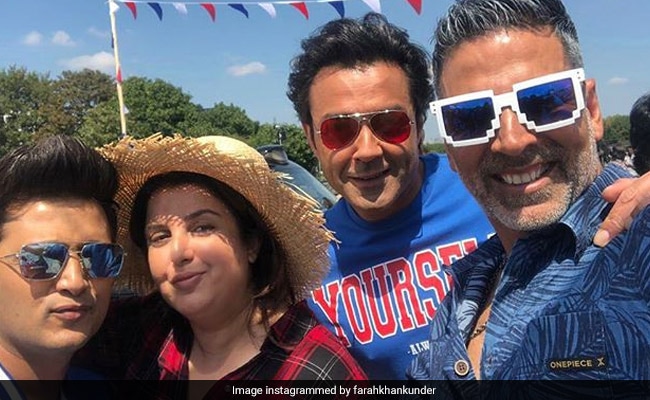 A day after Sajid Khan resigned as the director of Housefull 4, production house Nadiadwala Grandson Entertainment has zeroed in on director Farhad Samji (of filmmaker duo Sajid Samji and Farhad Samji) to helm the project. A statement from Nadiadwala Grandson Entertainment on Saturday, said: "Director of Housefull 3 Farhad Samji will now direct Housefull 4." The Sajid-Farhad duo already have the credit of making Housefull 3 - the only film which was not directed by Sajid Khan from the series so far. Sajid-Farhad are also the writers of Housefull 3, which released in 2016 with the ensemble cast comprising Akshay Kumar, Riteish Deshmukh, Abhishek Bachchan, Jacqueline Fernandez, Lisa Hayden and Nargis Fakhri.

Akshay and Riteish, who return to the Housefull franchise with the fourth instalment, took a stand against the alleged abusers associated with the film in tweets shared on Friday. While Akshay Kumar said he has cancelled the shooting of Housefull 4 till further investigations, Riteish Deshmukh 'seconded' the decision of his co-star. Following this, Sajid Khan tweeted his resignation and veteran actor Nana Patekar (who was also part of the cast and has been implicated in the #MeToo movement) quit the movie citing 'convenience' of the team.

Sajid Khan's name cropped up in the #MeToo allegations after three women accused the filmmaker of sexual misconduct. While actress Saloni Chopra accused the filmmaker of harassing her mentally, emotionally and sexually, actress Rachel White alleged Mr Khan asked her to "seduce him in 5 minutes" for a role. Journalist Karishma Upadhyay also claimed that Sajid Khan started an interview with "trash talk" and added he tried to forcibly kiss her when she was trying to leave the room. Following the barrage of allegations, Sajid Khan's cousin Farhan Akhtar tweeted: "shocked, disappointed and heartbroken" while Mr Khan's sister Farah Khan, the producer of Housefull 4, said: "If my brother has behaved in this manner he has a lot to atone for." This is what Sajid Khan posted on Friday:

This is how Farhan Akhtar and Farah Khan reacted:

The news of Nana Patekar quitting Housefull 4 was delivered by his son Malhar, who told news agency ANI in a statement: "Nana sahib thought of the convenience of everybody as he wishes the best for the producer and the crew and hence felt that stepping out of the project would be an appropriate thing to do at this point of time."

Apart from Nana Patekar and Sajid Khan, other celebrities such as Alok Nath, Subhash Ghai, Kailash Kher and Vikas Bahl, among others have been named as alleged sexual harassers.

Housefull 4, the cast of which also includes names like Bobby Deol, Pooja Hegde and Kriti Kharbanda, is slated to release on Diwali next year.