Sajid Khan, Accused of Harassment, Quits Housefull 4 Till He Can "Prove The Truth" 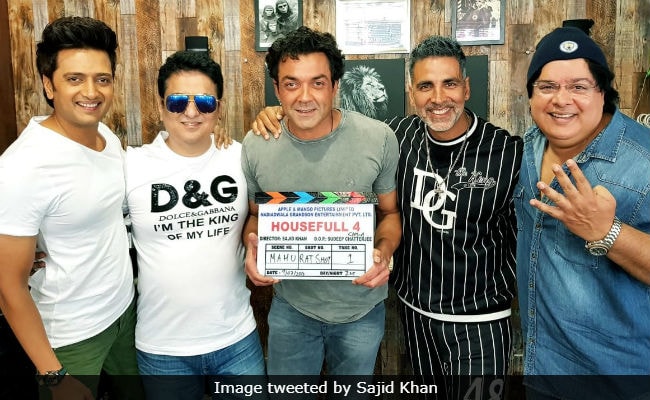 Sajid Khan with Housefull 4 cast on the sets of the film. (Image courtesy: Twitter)

Sajid Khan, Accused of Harassment, Quits Housefull 4 Till He Can "Prove The Truth"

Filmmaker Sajid Khan, accused of sexual and emotional harassment by three women, today announced he's "stepping down" from the post of director till the time he can "allay the allegations and prove the truth." Sajid Khan in his statement explained he's exiting the film because of the "pressure being put" on his family and Housefull 4 producer (Sajid Nadiadwala) and actors in the wake of #MeToo allegations piling up against him.

Before Sajid Khan posted his statement, Akshay Kumar - the lead actor of Housefull 4 - announced that the film's shoot has been cancelled pending investigation against Sajid Khan and also, Nana Patekar, who has been outed as a predator by actress Tanushree Dutta, in a 10-year-old sexual harassment case.

On her Twitter page, Karishma Upadhyay shared that in early 2000s, when she had gone to interview Sajid Khan, the director started by talking about his genitals. Ms Upadhyay alleges that when she decided to leave, Mr Khan blocked her way and "forced his tongue down my throat." When she met him a few years later for a show they were collaborating on, she claims she warned Mr Khan to behave properly and his reply was: "You are fatter that you used to be. I won't touch you with a barge pole."

Sajid Khan has preyed on women in the industry for years. Here's my story. #MeToopic.twitter.com/Rufzs9dsp6

Saloni Chopra, who was hired as assistant director in Sajid Khan's team, has accused him of harassing her mentally, emotionally and sexually. Ms Chopra alleged that Mr Khan would criticise her appearance and humiliate her (you can read her detailed account here). "It took me years to get over the trauma he put me through. I was so scared around the people I worked with," she wrote.

I finally decided to share my story with you. Writing this was like re-living all that horrible past I'd chosen to let go of, but I knew if I don't today, I may never. So here's #metoo#MetooIndiahttps://t.co/brouTYIBC7

Actress Rachel White re-tweeted Saloni Chopra's account saying she believed her and added her own story. Among other allegations, Ms White said that Mr Khan told her she could get a role in his film (he was casting for 2014 film Humshakals) if she could "seduce him in 5 minutes."

I believe you @redheadchopra I was sent by my agency then to meet Sajid Khan during Humshakals. Right after my agency told me about the meeting Sajid called me within the next 5 mins and said the meeting would be at his house opp iskon Juhu.

I believe you @redheadchopra I was sent by my agency then to meet Sajid Khan during Humshakals. Right after my agency told me about the meeting Sajid called me within the next 5 mins and said the meeting would be at his house opp iskon Juhu.

I said I was not comfortable meeting at home and to that he said "don't worry I live with my mom and she'll be around" I felt reassured and agreed. When I went to his house the maid directed me to his room and the drawing room was empty!! It was his bedroom

The #MeToo movement is gathering momentum in Bollywood and several prominent film personalities such as Alok Nath, Subhash Ghai, Rajat Kapoor and Vikas Bahl have been outed as sexual predators.